Cops take your medical marijuana? Tell 'em to give it back 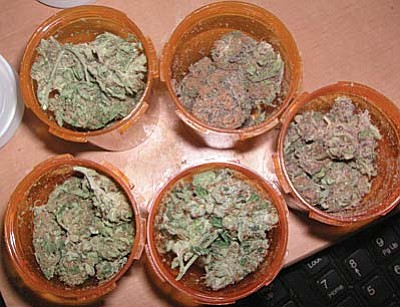 The Arizona Supreme Court rejected arguments by prosecutors that marijuana is strictly regulated by the federal government, leaving police legally powerless to turn marijuana over to anyone else. They gave no reason for their ruling.

PHOENIX -- Medical marijuana patients whose drugs are taken by police are entitled to get it back, the Arizona Supreme Court has ruled.

In a brief order, the justices rejected arguments by prosecutors that the drug is strictly regulated by the federal government, leaving police legally powerless to turn marijuana over to anyone else. They gave no reason for their ruling.

The order most immediately affects Valerie Okun, whose drugs were taken from her nearly two years ago on Interstate 8 near Yuma. While she was never prosecuted -- she has a valid medical marijuana card from California -- sheriff's deputies refused to return the drugs.

But Yuma County Sheriff Leon Wilmot told Capitol Media Services on Tuesday he's still not ready to hand over the marijuana. He hopes to get the case before the U.S. Supreme Court.

If he succeeds, that could affect more than the immediate question of when police have to return marijuana taken from medical cardholders.

It presents an opportunity for the nation's high court to look at the obvious conflict between laws in places like Arizona where at least some individuals can buy and have marijuana, and federal statutes which consider possession by anyone other than authorized researchers a felony. And that could pave the way for Supreme Court to finally rule whether states have an inherent right to enact their own marijuana laws.

"I find it a bit frustrating that Arizona's marching ahead with facilitating and implementing the availability of marijuana, a controlled substance, in conflict with federal law,' said Polk who chairs the Arizona Prosecuting Attorneys' Advisory Council. She said a court needs to "deal with the issue of federal preemption head-on.'

Okun initially was stopped at a Border Patrol checkpoint. Officers searched her vehicle after a dog alerted on it, finding marijuana and hashish.

Okun then asked the court to return the three-fourths of an ounce of marijuana that was seized. While the judge agreed, Ralph Ogden, who was the sheriff at that time, did not.

Attorneys for the sheriff said Arizona law requires any marijuana seized in connection with a drug offense be forfeited to the state. They also said the sheriff would be violating federal laws by giving the drug to someone else.

But in a ruling earlier this year, the state Court of Appeals said the sheriff's lawyers are missing a key point: Okun had a right under Arizona law to possess the drug in the first place, a point which county attorneys concede.

It was that ruling the Arizona Supreme Court refused to disturb.

"I think it's an unfortunate situation,' Wilmot said, acknowledging the Supreme Court only reviews a small percentage of cases. "They didn't feel that this one was important enough as it is in our eyes.'

The sheriff said he believes the ruling should not stand, which is why he wants to seek U.S. Supreme Court review.

"It has to do with the courts telling me to commit a crime,' he said. "As far as I'm concerned, that's not how we do business.'

The issue, the sheriff said, is that conflict between state and federal law.

"I understand the fact that the Arizona court could give me, basically, immunity if I did return this stuff,' Wilmot said. "But the bottom line is, they can't give me immunity from the federal government for prosecuting me for doing this because it is a federal law violation.'

That argument did not fly at the Court of Appeals where Diane Johnsen, writing for the judges, rejected Wilmot's contention he and his deputies could wind up in trouble with federal prosecutors.

"The sheriff is immune from prosecution under federal law for acts taken in compliance with a court order," she wrote.

This is not the only case making its way through the state's legal system testing the conflicts between state and federal law. Maricopa County Attorney Bill Montgomery is mounting a direct challenge to the legality of the Arizona Medical Marijuana Act because of the conflicts with federal statutes.

The Arizona law allows those with a doctor's recommendation to obtain up to 2 1/2 ounces of marijuana every two weeks from a state-licensed dispensary. Montgomery contends county officials cannot cooperate because they would be aiding in the violation of the federal prohibition.

A trial judge rejected Montgomery's arguments, with that case now awaiting a hearing before the state Court of Appeals.

Court: Medical marijuana patients should get pot back from cops
Court rules cops obligated to give marijuana back to woman
Court rules federal law has no bearing on zoning for marijuana dispensaries
Court commissioner wants deputies to return medical marijuana to woman in California
State prosecutors give up on effort to regulate labeling of marijuana products