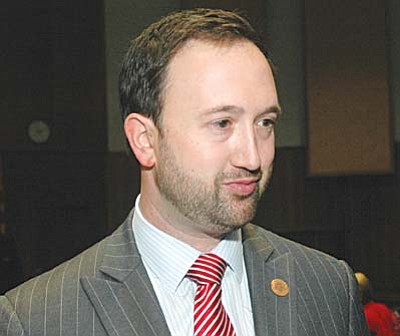 PHOENIX -- A one-term Oro Valley Republican state lawmaker best known for his vociferous -- and unsuccessful -- opposition to Medicaid expansion in Arizona is dipping his toe in the water for a congressional bid.

Adam Kwasman said Monday he is exploring whether to take on incumbent Rep. Ann Kirkpatrick and take his fight against the Affordable Care Act to Congress. If successful he would join the GOP majority which already has voted 37 times to repeal the law in what has been a largely symbolic move given that Democrats control the Senate and Barack Obama remains in the White House.

Where the U.S. House may have more to say if it remains an issue beyond the 2014 race is the issue of immigration reform.

The Senate already has adopted a plan supported by both of Arizona's senators. But Kwasman said he's not convinced it does enough to secure the border, calling it "a Band-Air to the problem (that) will not truly solve the security issue.'

Kwasman acknowledged the Senate-approved plan does add 20,000 new Border Patrol agents, effectively doubling the size of the agency. He said, though, that does not outweigh what he said will be the unilateral authority of Janet Napolitano, as the director of homeland security, to say that certain security conditions have been met, paving the way for the approximately 11 million in the country illegally to get a path to citizenship.

"We need to establish real, significant, independent points of accomplishments, benchmarks,' he said, though he said members of Congress are "on the right track.'

At this point Kwasman's exploratory committee makes him the lone Republican looking to oust Kirkpatrick in the congressional district that runs from the northern suburbs of Tucson through Pinal County, all of eastern and northeast Arizona into Flagstaff and Mohave County. But he has nowhere near the name ID of Pinal County Sheriff Paul Babeu who tested the water last year but ultimately decided he wanted another four years in his current office.

Babeu did not return calls seeking comment about any 2014 political ambitions. And he actually lives in a different congressional district, the one now occupied by Republican Paul Gosar, though there is no requirement that members of Congress live in the district they want to represent.

The last Republican to take on Kirkpatrick was Jonathan Paton who fell short by about 9,200 votes. But Kwasman said 2014 will be different.

"I think 2012 was a bad year for Republicans,' he said. But Kwasman said the sprawling district has shown that it "swings wide at midterms versus presidential year elections.'

Kirkpatrick was first elected in 2008 -- a presidential year -- only to lose her seat two years later to Gosar by about 13,000 votes. The two did not face off last year because Gosar, after redistricting, sought and gained reelection in a different district.

In a press release last month, political consulting firm MBQF Consulting said a poll of 349 likely GOP primary voters in the district had Babeu the pick of 27.3 percent. House Speaker Andy Tobin was a distant second at 5.1 percent, with Kwasman and Doug McKee, who made an unsuccessful bid for the Republican nomination for U.S. Senate, each at 2.1 percent.

But nearly 60 percent said they were undecided.