Mechanic sets up shop in Cottonwood 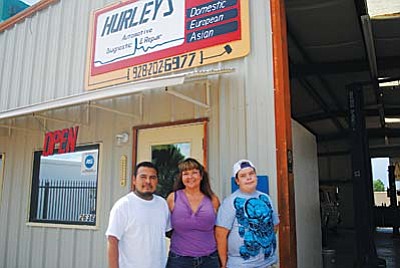 The Hurleys at their recently opened auto repair shop.

After attempts to secure a business loan through the Yavapai-Apache Nation, they sold their home to afford the building near State Route 260 and Western Drive when it suddenly became available.

Christine was born in Cottonwood and spent much of her adult life in the area. She handles the office side of the business while her husband takes care of the three-bay garage. Eric is the only mechanic at Hurley's Automotive Diagnostic and Repair.

"We're here 14, 15 hours a day just trying to get everything settled in," Christine said. "It's been a lot of work, but the customers so far have been awesome."

The two have been married for about two years. They live on the reservation with Christine's 12-year-old daughter and 14-year-old son.

"I'm very close with my children," Christine said. "My son's at the shop until school starts; he has his Xbox in the shop so he can play video games or watch movies."

The mechanic business is new to Christine, who has a human resources and public service background on the reservation.

Eric was a "grease monkey" at 13 and, after graduating from high school, decided he wanted to open his own shop.

He began working on cars professionally at 19, and received a bachelor's in business from Miami University in Ohio. He received electrical and mechanical training for foreign and domestic vehicles from schools in Missouri and Florida.

After about nine years of schooling, the Tuba City native decided to open his own shop.

Hurley's newness makes prices relatively low. Eric offers discounts depending on the job, but prices are generally set at $65 per hour Monday through Friday, $85 on Saturday and $95 on Sunday.

"People come in, they need help, they get help," Eric said.