City turns down MUHS fee reduction for pool use 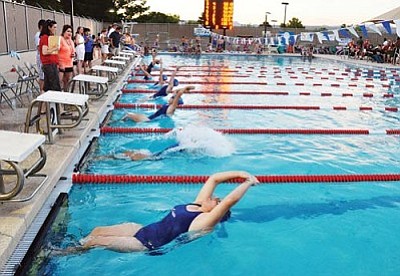 VVN/Jon Pelletier<br> Mingus Union may have to re-evaluate its swimming program's funding.

COTTONWOOD -- Mingus Union High School asked for reduced fees for the exclusive use of the Cottonwood Recreation Center's eight-lane competition pool from August through November. But, even though the council had earlier given a break on use of the outdoor pool by the Clippers swimming team, they were not so receptive to the high school request.

The high school proposed to pay the city $5,000 of the requested $9,350 charge. The swim season runs from mid-August of each year through the first week of November. Scheduled use of the pool facilities by the high school is Monday through Friday from 5:30 to 8:30 p.m. and Saturday from 7 to 10 a.m.

Cottonwood's Community Services Manager Richard Faust told the council the proposal represents an "exclusive" formula and that the city has a policy of charging at least 50 percent of the cost, 100 percent for exclusive use. The cost of operation of the pool for that time period would be $22,000 to $23,000 and $9,350 is less than 50 percent. He also said maintenance costs have gone up during the past year.

Mingus High School Finance Manager Kirk Waddle suggested the school district has lost 33 percent of its funding from the state and it will have to "re-evaluate continued funding" of the swimming program.

Council member Randy Garrison said the city has been very cooperative with the high school, just recently having rezoned land the school wants to sell. Garrison suggested that a booster organization be created to help offset the cost.

Councilman Terence Pratt said this is not the same scenario as the recent Clippers proposal. They had agreed to build the balance of the shade structure at the pool this year, worth $14,000, if the city would forgo the annual fee of $4,000.