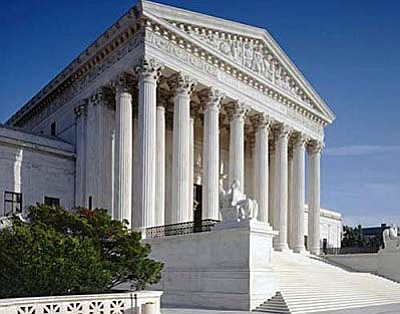 In an opinion written by Justice Antonin Scalia, the majority rejected arguments by state Attorney General Tom Horne that Arizona is free to demand more than the federal form requires.

It mandates only that those registering to vote sign an affidavit, under penalty of perjury, that they are citizens and eligible. But Horne argued that Arizona is free to reject those forms unless applicants also submit actual proof of citizenship, something mandated by a 2004 voter-approved law.

Monday's ruling specifically requires state and local election officials to accept -- and, more to the point -- to register those individuals who use the form prescribed by the National Voter Registration Act even if they provide no proof of citizenship.

But Horne insisted Monday the ruling was only a setback. He noted the court said Arizona can petition the federal Election Assistance Commission to alter its form to allow Arizona to add that proof-of-citizenship requirement.

But Nina Perales, attorney for the Mexican American Legal Defense and Educational Fund, pointed out Arizona made such a request in 2005 and was rejected by the four-member commission on a 2-2 vote.

"There is no reason to think Arizona would be successful on a second try, particularly because Arizona cannot point to a single instance of a non-citizen registering to vote or trying to register to vote using the federal form,' she told Capitol Media Services. "With no facts on its side, Arizona cannot carry its burden of providing that registrants should include additional paperwork with their applications.'

Secretary of State Ken Bennett acknowledged when the case was argued last year he has no evidence people who are not citizens are registering to vote, either now with the federal form or before the 2004 proof-of-citizenship requirement.

Horne, however, said he intends to try again.

But that is likely to prove fruitless: There are no commissioners as the U.S. Senate has yet to confirm any presidential appointees. Horne said, though, that could lead him back to the Supreme Court.

Monday's ruling does give Arizona a bit of wiggle room. The justices said the state can refuse to register even someone using the federal form -- but only if election officials have "information in their possession establishing the applicant's ineligibility.'

And nothing in Monday's ruling prohibits the state from requiring citizenship proof from those who use state-created forms to register.

Local election officials have said the vast majority of those who do register use that state form. That, however, now could change.

Perales said the decision provides a new tool for groups conducting registration drives to now sign up new voters using that federal form -- and without having to get applicants to submit one of the documents that Arizona considers acceptable. That includes an Arizona driver's license, passport or birth certificate.

The 2004 law requires both proof of citizenship to register and identification to cast a ballot at the polls. Foes challenged both.

The courts sided with the state on the ID at polling places requirement. Foes of the Arizona law never appealed that decision, and it was not an issue in Monday's ruling.

Horne, in his arguments to the high court, did not dispute the National Voting Rights Act requires states to "accept and use' the federal voter registration form. But he argued that does not conflict with Arizona law.

"Because only U.S. citizens are eligible to vote, Proposition 200's evidence-of-citizenship requirement is consistent with the NVRA's express goals,' Horne argued to the high court. "Congress did not intend the NVRA to bar states from properly assessing whether an applicant who registers to vote is eligible to vote.'

And he said Arizona can add its own proof-of-citizenship requirements on top of everything required in the federal form.

Scalia dismissed that argument as nonsensical.

"For example, a government (decree) that 'civil servants shall accept government IOUs for payment of salaries' does not invite the response, 'sure, we'll accept IOUs -- if you pay us a 10 percent down payment in cash,' ' he wrote.

He also pointed out that the federal law says a state shall "ensure that any eligible applicant is registered to vote in an election ... if the valid voter registration form is postmarked' by a certain deadline.

"Yet Arizona reads the phrase 'accept and use' ... as permitting it to reject a completed Federal Form if the applicant does not submit additional information required by state law,' Scalia wrote. "That reading cannot be squared with Arizona's obligation.'

The court said it was not disturbing the requirement that those who use the state-designed form -- the majority of those now registered to vote -- must provide proof of citizenship.

"States retain the flexibility to design and use their own registration forms,' Scalia wrote.

"But the Federal Form provides a backstop: No matter what procedural hurdles a state's own form imposes, the Federal Form guarantees that a simple means of registering to vote in federal elections will be available.'

What states may not do, Scalia wrote, is demand that those who register using the Federal Form provide everything the state registration form requires.

"If that is so, the Federal Form ceases to perform any meaningful function, and would be a feeble means of increasing the number of eligible citizens who register to vote in elections for federal office,' he wrote.

Gov. Jan Brewer, who was secretary of state -- and therefore chief election officer -- during much of the time the 2004 law was being challenge, brushed aside the significance of Monday's decision.

"From what I understand, (it's) a very narrow ruling,' she said, pointing out that Arizona remains free to require proof of citizenship in its own forms. Brewer said it will be up to Horne and Bennett to decide what to do now.