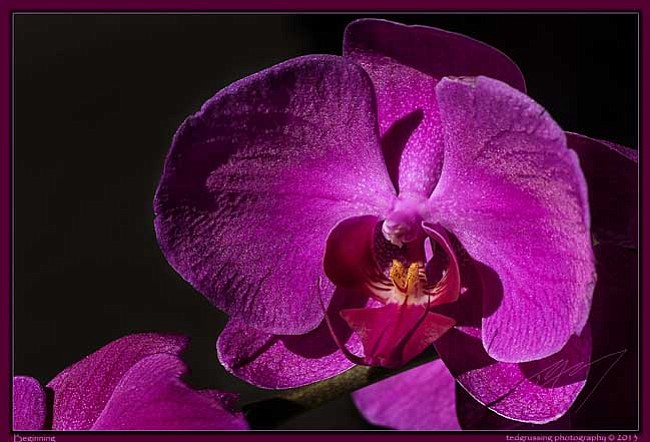 Beginning to appreciate the orchid as a flower worth exploring ... not sure why I have not done much with them before, but likely because I've never had one before. Ted & Sus gave one to Cork a few weeks ago. With any kind of luck I will keep it alive and be able to shoot it more in the future. The Iris and dandelion still remain my favorites, but I am having fun exploring the inner beauty of these orchids. Next shoot will go into the depths of the blooms. The thing about exploring the inner sanctum of flowers is that the intensity of the color and beauty of the inner world increases as you venture in ... many people are the same ... with flowers it is genetic, with humans it is by choice.

Had a nice day celebrating Corky's birthday and dinner out at a nice restaurant. Think we'll do it again tomorrow as it beats my cooking which is still a hit and miss thing.

A day of gem cutting later today, first a little sleep and then espresso ... My friend Murray in Australia is a terrific human being and an opal dealer to boot. He has been asking me to send out some shots of opal I cut for some time now, so later tonight the photos will be the stones I cut today. With most gemstones it is the skill of the cutter that brings out the beauty of the material, but with opal the beauty is already there and if you are good you can bring it out for all to see and not destroy it. It takes years to learn to read opal rough and I have been blessed with some of the most knowledgeable and skilled miners, dealers and cutters in the world who have taught me how to read it and work it. Been at it for over thirty five years now and still learning. No two pieces of opal are the same ... neither are humans ... same search for beauty within and again with gemstones it is either there or not and in humans it all depends on choices made. With the stones you cannot bring out beauty that is not inherent in the stone, but humans can change and therein lies hope.

Cheers ... blessings and some shared smiles.