Building a home for Cpl Jordan Maynard (with photo gallery) 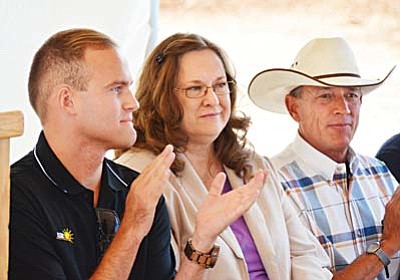 Homes for Our Troops broke ground on the building project for Marine Cpl Jordan Maynard and family on Saturday, June 22, on S. Anica Lane in Cottonwood. Cpl Maynard was leading a foot patrol during his second deployment in Afghanistan in 2011 when he stepped on an IED, resulting to the amputation of both legs above the knee. Homes for Our Troops, based in Tauton, MA, works to build new homes for military personnel with a floor plan and features that accommodate the physiology of the homeowner. The organization is funded by donations and during the groundbreaking ceremony Veterans Liaison Larry Gill made an appeal for those in the audience to help with the construction of the next home (the Maynard home is fully funded) by donating to Homes for Our Troops. Speakers at the ceremony included Mayor Diane Joens, County Supervisor Chip Davis and Congressman Paul Gosar, as well as Travis Wood, who received his home in 2009, and Cpl Maynard, who appeared with his family, wife Jennifer and son Jake, thanking everyone in attendance, including many veterans, who turned out to offer support. For more information visit homesforourtroops.org. VVN/Jon Pelletier