It is a wonderful little planet we are space traveling on 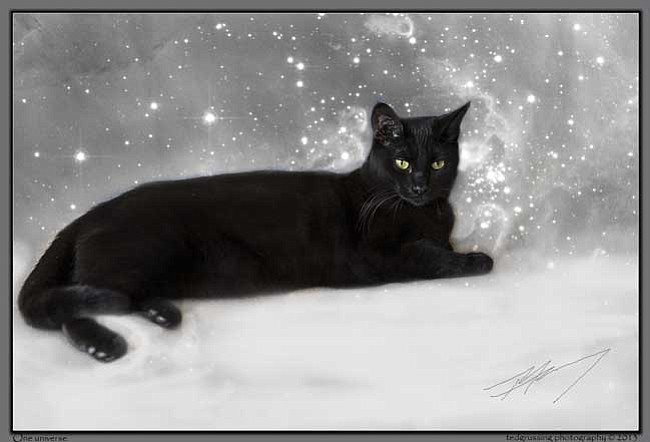 Some things are as simple as black and white, clear choices, clearly in charge of One universe and in that spirit I took a few shots of One relaxing on her counter after a light meal this afternoon. She is also perfecting her ability to open all drawers and cabinet doors in the house; latched doors will be next. Have not seen such enthusiasm for discovery since Nimbus. Her occasional frustration is noted with loud growls...she has taken over.

A great day with a lot of cutting and tutoring a friend who wants to learn the fine art of gem cutting. Yes Murray, I'll take some shots of the opals tomorrow and perhaps One will have an opal collar on :+)

As usual it is a wee bit late and going to shut it down before light begins streaming through the windows. Espresso is four hours away.

It is a wonderful little planet we are space traveling on. We are in a period of the third atmosphere that the planet has had; the first two were hostile to our form of life and lasted more than two billion years and it was the joining of the archaea (3.5 billion years ago) by cyanobacteria (about 2.7 billion years ago) which produced oxygen and gradually converted earth's atmosphere into an oxygen based atmosphere which was a catastrophic event for most life forms on earth at the time...they were life forms which need an anoxic (oxygen lacking) atmosphere to survive ... mass extinctions resulted ... bad for them, good eventually for us.

Have a terrific day and remember that climate change has been with our little planet for over four billion years ... oxygen content in our atmosphere currently about 21% has varied to a low level where combustion is not possible to levels so high that spontaneous combustion would occur in rain forests. Enjoy the ride, earth was here long before us and will be long after we are gone and will continue to do its own thing. Perhaps One will have her way with it though :+)