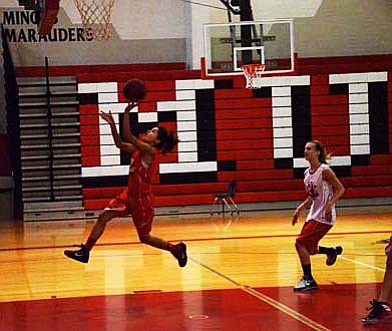 If the Mingus Union girls basketball team was looking to turn things around in the summer following a 7-18 record following the regular season, they were I for a poor surprise as lack of leadership and experience has given the team a steep learning curve.

"We're definitely working hard ... We're not winning many, we've won a couple, but we're playing teams that have been together for a long time," said head coach Art Moncibaez. "We're just getting better, as we go along. We're young, we can ... very few times have we had the varsity girls together."

The Marauders summer team has consisted of two healthy seniors, one that is injured, a handful of juniors and sophomores, four freshmen and a seventh grader. The other upper classmen have been busy with summer school (which recently ended), jobs or another reason. While this would not be a big deal if the girls were just practicing over the summer, it does hurt the team because they are in two different leagues, one in Phoenix and another in Flagstaff, and play eight games a week. The girls are able to go-to, and play in, both leagues at no expense to them, thanks to the support and donations of the community and local businesses.

"Its been going good, but we need a lot more girls to show up, to start building," said senior Angel Chavez "It's been tough, because there's definitely a lot of younger girls."

While the wins may not be as frequent as Moncibaez or Angel may have hoped for, both agree that the young girls are getting valuable experience playing games at the varsity, and junior varsity (JV), level, compared to exclusively at the JV level. This valuable experience will help propel some of the girls into varsity spots this year, but it will prepare them for when they are ready to take the next step and contribute at the higher level. During a typical game day, the JV will play one game, and the varsity two, meaning the younger kids are getting that many more games under their belt.

"They'll be good. They'll be good because they're starting young," Moncibaez said. "Like I said, we have four incoming freshmen that are playing varsity ball, and JV, and they're learning a lot. The number of sophomores are pretty good, but we're missing a lot of incoming juniors, they are doing something at this time; working, or not showing up, that's kind of discouraging, but hopefully they'll come out when the season starts. But these girls will be, hopefully ahead of that."

Moncibaez knows that there is not too much he can do to get more experienced players there, so he just goes with it and makes the sure the team is learning and getting better. Through it all, they girls have hung close with some teams.

"We just deal with what we have," Moncibaez said. "We just go play and do the best we can. In Phoenix, the league over there, we won a couple games, came close with a couple more, but sometime we play girls that play club basketball. They get together, they're good, they're really good and that's where we want to be when these girls become seniors."

The Marauders' head coach is on his way to creating the rapport, camaraderie and experience that club players have, with his younger girls that are on the team. As the middle of summer hits, Moncibaez said his team is "barely starting to get that varsity mentality, where they're starting to work hard."

"Exactly, we're starting to see it, definitely," Moncibaez said. "Then, once we get the senior leadership here, they'll be showing the drills and all that ... a lot of girls say they're going to play and don't show up, so that's kind of discouraging, but the girls that are showing up are improving a lot, [I am] very pleased with their improvement."

As for what can be done with the team right now, Angel said that they just have to take the summer in stride and wait for the upcoming season.

"We kind of just have to brush it off and wait for the season, because then it will be better," Angel said.