Honor Flight: Paying tribute to all those who gave so much 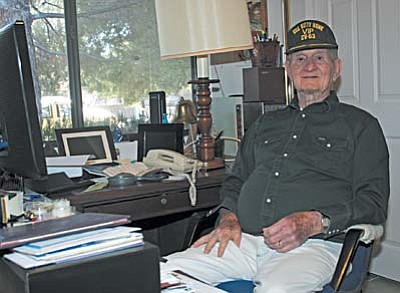 "Humble," is how 86-year-old William Bowden of Cottonwood describes how he feels about being selected by the Honor Flight Network to visit the National World War II Memorial in Washington, D.C.

He said he really didn't do that much when he was in the service. He was only 17 when he enlisted near the end of World War II.

"I did not go overseas," William said. "I did nothing that was heroic. But to be selected for the Honor Flight is marvelous."

The Honor Flight Network is a non-profit organization created to honor America's veterans. Top priority is given to World War II survivors. Time is of the essence. More than 800 World War II veterans are dying each day.

He will fly to Washington, D.C. from Sky Harbor Airport in Phoenix April 9, visit the memorial on April 10 and return home April 11. He explained that he has to get to Sky Harbor on his own.

"From the time you report to Sky Harbor, you don't pay a dime for anything," William said. "I think that's a marvelous thing."

About a year after William sent in his application for the Honor Flight, he heard back.

"Someone got hold of me and said 'It's time for you to go,'" William said.

Although William spent only two years on active duty, he has spent his life in service of one form or another.

"I'm a member of the Navy League," he said. "We are the voice of the Navy, primarily with Congress. We do whatever we can to get the Navy funded and taken care of," William explained.

He was born and raised in Atlanta, Ga. He started active duty after completing the ninth grade. He was sent for training to the Great Lakes Naval Air facility. From there he was shipped to Ohio.

He said that facility received airplanes from the factory and distributed them to the fleet.

"Basically, I pulled the planes with a little tractor from one part of the field to another," he said.

William was then shipped back to Chicago to the Navy Pier.

During his time in the Navy, he took advantage of all the education opportunities available.

"I worked on my education and took all the tests," he said.

After his discharge, he went to Ellenwood, Ga. He explained that he went to the high school for Clayton County to see about finishing high school.

"They looked at all my test scores and told me I had earned my high school diploma," he said. "I took that Navy education and now I have a bachelor's of science in business."

During the years since World War II, William has worked as a communication electrician for Western Electric and then Western Union. He also worked as a union painter.

"I ended up spending 40 years in Phoenix as a real estate broker," William said. "I just gave up my license last year. I was primarily in land sales."

In the meantime, William had two daughters - Marti and Karen -- married his third wife, Marlyn, and has had three bypass surgeries and a valve replaced in his heart.

He is also a commissioner for the Cottonwood Parks and Recreation Department.

"As crazy as this sounds, I spent 48 years wearing the U.S. Air Force uniform," he said. "But I was not in the Air Force."

He explained that he flew missions for the Civil Air Patrol.

"I was primarily an observer," he said.

In the CAP, William was a cadet commander and also a group commander.

"I had six or eight squadrons under my command," he said. "We used to fly searches for the Air Force."

He said one of his proudest memories of the CAP was when a plane went down in the White Mountains, just a little south and southeast of Show Low.

"The plane got in trouble," he said. "The pilot was hired to take a woman and child out of the state."

He said the plane landed in what appeared to be a small lake and it flipped over.

"We flew over and the pilot came out with a multi-colored streamer and was waving it," William said.

"We took blankets and a big Thermos of coffee and dropped it to them," he said. "The snow was deep and they wouldn't have been able to walk out."

He is proud to report that all three of them, the pilot and both of his passengers, survived the crash.

Over the years, William has enjoyed visiting Naval ships as a member of the Navy League.

"I've had the pleasure of going out with a number of ships," he said.

That includes an aircraft carrier and a submarine. He explained that submarines are called boats in the Navy and not ships. The one he was on went 700 feet down.

There is one other thing William thinks about doing.

"I would love to see the Navy Memorial," he said. "But I don't know if I'll get the chance."