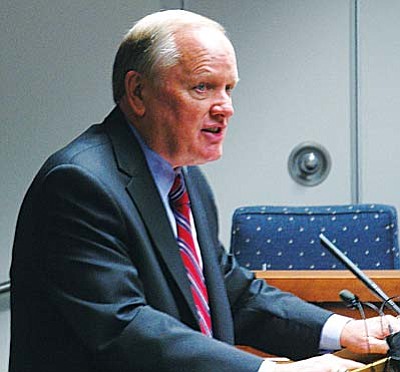 Mel McDonald, the former U.S. Attorney for Arizona, urges lawmakers Thursday to kill a measure that would allow police to keep and destroy marijuana they seized even if if turned out the person was allowed under state law to have the drug. McDonald said he became a believer in medical marijuana because of the needs of his stepson. (Capitol Media Services photo by Howard Fischer)

PHOENIX -- Rejecting the pleas of the state's former top federal prosecutor, a House panel voted to let police destroy marijuana they have seized even if it turns out the person had a right to possess it.

Melvin McDonald, who was the U.S. Attorney for Arizona in the early 1980s, told members of the Judiciary Committee that SB 1441 is an improper end-run around the 2010 voter approval of the Arizona Medical Marijuana Act. And he called the fear by police that they will be subject to prosecution under federal law if they give back the drugs "utter nonsense.'

McDonald admitted he is more than an idle bystander.

He told lawmakers of the seizures suffered by his stepson, Bennett Black, who suffered a traumatic brain injury in a 1997 accident and eventually had to have part of his brain removed. McDonald said both the seizures and the pills designed to control them made Bennett sick and nauseous.

It was only when his wife, Cindy, began to get marijuana for their son -- illegally until the law was passed -- that he was actually able to eat and reverse the weight loss from 118 pounds to 180 pounds.

Committee members approved the measure anyway on a 5-3 party-line vote. Its fate, however, remains uncertain.

Two of the Republicans who supported the legislation said they did so to give the full House a chance to weigh in. But they expressed concern with anything they believe undermines the 2010 law.

Rep. Ethan Orr of Tucson said he fears that the legislation could be used to effectively shut down an entire medical marijuana clinic by seizing the drugs, leaving its patients without their drugs while the clinic owners sought out a new supply.

And Rep. Doris Goodale of Kingman explained how she used to be against anyone using marijuana.

"I have come to realize through personal family situations that yes, there is an applicable use of medical marijuana,' she said. Goodale also said she does not want to undermine the will of the public which created the program.

Those soft Republican votes are only part of the problem faced by the Arizona Prosecuting Attorneys Advisory Council which already has pushed the measure through the Senate.

Because the law was adopted by voters, it can be amended only with a three-fourths vote of each chamber. That means proponents have to convince 45 of the 60 House members to go along.

And Anjali Abraham with the American Civil Liberties Union said even that may not work.

She pointed out the Arizona Constitution allows legislators to tinker with voter-approved measures only when the "further the purpose' of the original law. Abraham said allowing police to keep marijuana taken from patients does not do that.

The legislation is designed to overturn a ruling last year by the state Court of Appeals.

In that case, Valerie Okun, a California medical marijuana patient, was stopped by Border Patrol just inside Arizona. The agents took her marijuana and referred the case to the Yuma County Attorney's Office for prosecution.

The case was dropped after Okun eventually produced her California medical marijuana card. Arizona law, which allows those with a doctor's recommendation and a state-issued card to obtain up to 2 1/2 ounces of marijuana every two weeks, provides similar recognition to patients from other states.

But when Okun demanded her marijuana back, the Yuma County Sheriff's Office refused, saying deputies would be violating federal laws which continue to make possession of marijuana a crime.

The appellate judges, however, said there is no danger of federal prosecution, at least in part because the deputies would be obeying a lawful court order.

That case is now on appeal to the Arizona Supreme Court. But Kim MacEachern, lobbyist for the prosecutors, said lawmakers should make clear that marijuana, once seized, cannot be returned.

"The Department of Justice has more issues on their plate than to worry about a deputy sheriff turning back to a lady marijuana that should have never been seized in the first place,' he said. And he said the legislation lacks merit.

"It is nothing more than prosecutors trying to yet create another exception to allow them to do what the voters of the state of Arizona said you can't do,' McDonald said. He said those who have medical marijuana need it to live.

"My boy does not eat without first taking the marijuana,' he said.

MacEachern said the legislation still leaves patients with the option of filing a claim against the agency for the value of the drugs taken.

She also said the prosecutors' desire to destroy the drugs is not unprecedented. MacEachern said that's what happens with prescription drugs when police take it from individuals who cannot immediately prove they are entitled to possess them.

Senate panel says police destroy seized marijuana, including medical variety
State prosecutors give up on effort to regulate labeling of marijuana products
Cops take your medical marijuana? Tell 'em to give it back
Court: Medical marijuana patients should get pot back from cops
Court rules cops obligated to give marijuana back to woman