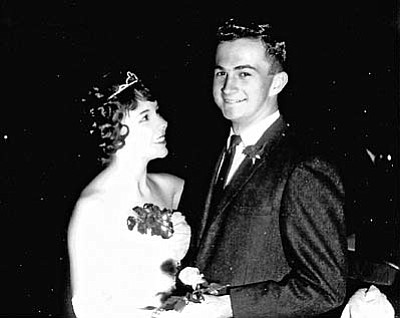 Jim and Dinah Gemmill of Clarkdale are celebrating their 50th wedding anniversary this year. They were married on February 22, 1963, and have lived in Tempe, Prescott, Milpitas, Calif., and Clarkdale. They graduated from Mingus Union in 1960 and ASU in 1964. Dinah and Jim were both educators locally and in Prescott and Northern California. After Darren was born in California in 1967, they returned to Clarkdale in 1969. Dinah is proud to tell people she has lived all but nine years of her life within a few blocks of her church, St. Thomas Episcopal Church in Clarkdale where she was baptized in 1943. When they returned to Clarkdale, they bought the house where Jim lived while in high school. They live there still. They were both teachers for most of their careers. Dinah retired from Cottonwood Oak Creek District and Jim retired from Clarkdale-Jerome Elementary District. They have two children, Darren with his wife, Candy and sons, Bradley and Brandon who live in Clarkdale. Gayle lives with her husband, Scott Mabery and daughters, Bailey and Morgan in Cottonwood. They are celebrating their anniversary by going with the entire family to Kauai, Hawaii later in May after Bailey graduates from Mingus Union and Morgan graduates from Clarkdale-Jerome School. Dan and Lori Mabery, the other grandparents, will also be joining the group to celebrate their 25th anniversary. Jim and Dinah said, “We feel blessed to have such a wonderful family and friends. We are enjoying our retirement with family trips, grandkid’s sporting events, vacations to the summer property in Colorado on the Dolores River and many local activities in the Verde Valley.”