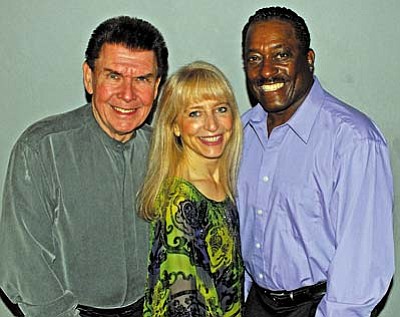 Courtesy photo<br /><br /><!-- 1upcrlf2 -->Tom & Shondra are joined by Sammy Davis (right) and other for a Good Friday "Power of Life" concert in the Village of Oak Creek.

The Center for Positive Living Sedona proudly presents a very special evening of music and celebration on Good Friday with the presentation of "The Power of Life" concert. This concert features Sedona's popular entertainers Tom & Shondra and Sammy Davis. The concert will be presented as a fund-raiser for CPL Sedona on the evening of Good Friday, March 29, at 7 p.m. at Canyon Moon Theatre.

Prior to their relocation to Sedona in 2002, Tom and Shondra performed their "Power of Life" concert throughout southern California for over 18 years. In 2003 they debuted it at Unity of Sedona, where it became an annual event and later in 2006 performed it for several years annually at the Center for Spiritual Living in Flagstaff.

Shondra explained, "We're excited to bring this concert back to Sedona as it's been a while since we've performed it here. This concert is non-religious but rather inspirational, which allows this show to appeal to a wide audience and I think that's one of the reasons why this program has always been so successful." Tom agreed, "Between the variety of music and monologues, this program will take you on a ride of emotions. It's a wonderful way of celebrating the life of Jesus. Having Sammy with us in our concert this year is going to be amazing and besides the music he'll be singing with us, we've added two new songs to the show that he'll be singing."

Sammy Davis is best known around Sedona and the Verde Valley as an exciting entertainer with his band, The Sammy Davis Band as well as his portrayal of the late James Brown and Jimmy Hendrix in the popular tribute band, The Heavenly J's. For those who don't know, Sammy Davis has quite a background in theater and played the leading role in CBS producer writer Ron Bacon's musical, The Chicken Man in the year 2000 at the Sedona Art Barn. Sammy Davis commented, "I'm really happy to be performing musical theater again. It's almost been a forgotten part of my life and it feels good to be reconnected with the theatre, acting and singing this kind of material."

Shondra added, "We are thrilled to have Mike and Jeff with us because they are incredible actors."

Mary Guaraldi, Artist Director of Canyon Moon added, "I remember attending this concert several years ago and thoroughly enjoyed it. We're pleased to have this concert performed at CMT and hoping to pack the house as this show is a benefit for CPL Sedona."

The Center for Positive Living holds its services every Sunday at 10 a.m. at Canyon Moon Theatre. Rev. Janet Kingsley bases her talks on universal spiritual principles such as those found in Science of Mind and Unity teachings. The Center for Positive Living Sedona provides a multitude of opportunities for anyone, in any stage of life, to grow spiritually while enjoying the process. "Having fun with Spirituality," is one of the mottoes of the church as the services are lively and celebrates the positive aspects of humankind, the world around us, and our relationship to the Power within. Rev. Janet commented, "Shondra is the CPL Sedona Music Director and Tom and Shondra are our soloists every Sunday. We're all looking forward to this year's Power of Life concert with the addition of Sammy Davis and our guest actors."

Besides the concert that evening, there is a raffle with some terrific prizes in which include a three-day-two-night stay at a Diamond Resort, Light Therapy sessions with David Lowell, jewelry by Spiritual Adornments and more.

Tickets are $15 and may be purchased at Bashas' in west Sedona, Rycus Corners in the Village of Oak Creek or by calling Canyon Moon Theatre at (928) 282-6212. Tickets are also available at the door the evening of the concert although seating is limited. Canyon Moon is located in the Village of Oak Creek Factory Outlets three doors down from the GAP on Hwy. 179. The Center for Positive Living Sedona holds services every Sunday at Canyon Moon on Sundays at 10 a.m.