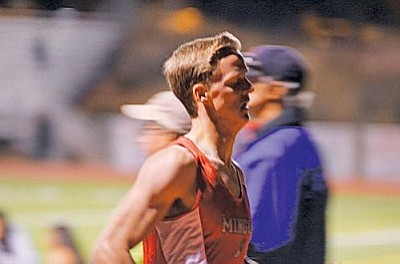 On March 28th, the Mingus Union track and field team broke off into two groups, the distance runners and everyone else.

"We did good [at the two events]," said track and field head coach Yancey DeVore. "Our distance was in Scottsdale at the Scottsdale distance classic and our sprinters were at Peoria, so we had a split squad."

"I think we had five automatic qualifiers for state at that meet [the Scottsdale Distance Classic], so that's really good," DeVore said.

The boys' 3200-meter race had two Mingus Union students place in the top-20. Junior Gustavo Banks set a PR in the 3200 with a finish of 9:58.88 seconds, good enough for the distance runner to nab 11th. Sophomore Jordan Bramblett finished about 25 seconds after Gustavo, with a time of 10:25.83, also a PR, and also good enough to land the No. 20th finish.

The 4X800 relay team of Jasmine Banks, Sienna Gehl, Anissa Urueta and Brenna McCallum finished the relay in 11:03.03, which earned them sixth, 1:05.02 behind the first place team from Mountain Ridge. The girls had the best finishes for Mingus, the relay team brought home 6th, the highest finish, junior Monica Soliz completed the 3200 in ninth with a time of 12:08.35, and senior Skyler Storie set a season best in the 800-meter with a time of 2:29.61, good enough for 12th, and a PR in the 1600-meter when she finished the race in 5:24.81, earning the senior seventh.

Thirty-one miles west of Scottsdale in Peoria, coach DeVore had the rest of the track and field squad at the Peoria Invitational. The boys had 15 individuals and relay teams place in the top 20 and their female teammates had 22 athletes in the top 20. Senior Delaney Scanlan, juniors Ryan Talbot, Brennan Kithcen and Heather Calandra and sophomore Allison Whitworth led Mingus with six top-3 finishes. Each student picked up a top-3 finish and Ryan and Brennan added one more top finish with fellow junior Dakota Hanks and sophomore Javin Hesel in the 4X400-meter relay, where the team placed second with a time of 3:31.74.

Ryan ran his usual, and strongest race, the 400-meter, and claimed third place with a time of 49.91, his second consecutive sub-50 second 400. Delaney finished third in the 200-meter prelims with a time of 27.35, but did not start in the finals of the race. Mingus' star thrower, Heather, finished second in the shot put, tossing the shot 38 feet, 5.5 inches, just over two feet shy of first place. Rounding out the top-3 finishes for the Marauders is jumper Allison Whitworth. Allison cleared five feet even on the high jump, tying her personal best and setting a season best, and while finishing fourth in the pole-vault, Allison set a personal best in the event with a vault of 8 feet, six inches.

"Heather had a PR in the discus, and again, there were a lot of our freshmen and sophomores, younger kids, they had personal records and I believe one of our sprinters had a PR in the 100, I believe, so that was really good," DeVore said. "Ryan did a really good job in the 400, he was under 50 [seconds] ... he was running in a really fast race."