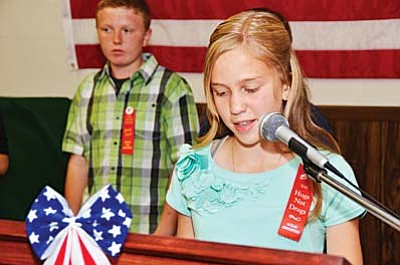 Jerome Elks Lodge #1361 in Clarkdale held its' annual Youth Week Awards Ceremony on Thursday, May 2. Following a spaghetti dinner, Donna Giles, President of the Elks Lodge, began the awards presentation by introducing Bill Frazier, Chairman of the Hoop Shoot, to call up four attending winners of this year's Hoop Shoot Free Throw contest. Dennis Holt, Elks Northern Arizona District Scholarship Chairman, then introduced one of the winners of the Most Valuable Student Scholarship, Taylor Zale, who was on hand to accept the honor and a check for $1,200. The other three recipients: Mayla Truncali, Dakota Jones and Jessica Reinhart were unable to attend. Closing out the awards ceremony was a reading by each Americanism Essay Contest winner, introduced by Americanism Committee Chair, Jeanette Kuhlmann. There were three recipients from St. Joseph School and one from Camp Verde Middle School, each read the essay that won on a regional level. Cottonwood Mayor Diane Joens attended the event and congatulated each of the evening's winners in closing remarks.