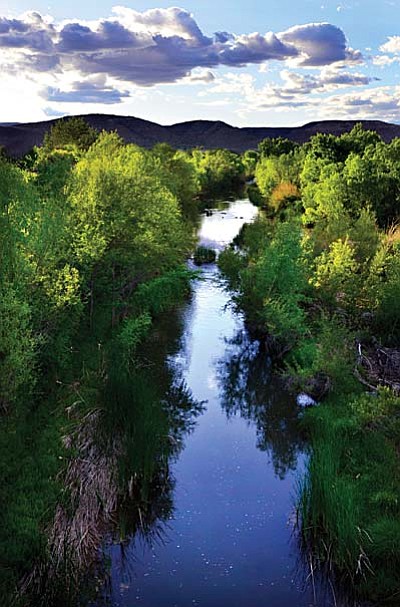 Arizona Water Sentinels found that the upper Verde River is literally “going with the flow” because the base flow of the river is gradually decreasing over time, including over the last five years when the rate of decrease was about 1 cubic foot per second (cfs) per year.

The Grand Canyon Chapter of the Sierra Club released the Going With the Flow report, summarizing the results of over five years of volunteer flow monitoring on the upper Verde River by the Arizona Water Sentinels, a grassroots citizen science program that focuses on monitoring and protecting Arizona rivers and streams.

Arizona Water Sentinels found that the upper Verde River is literally "going with the flow" because the base flow of the river is gradually decreasing over time, including over the last five years when the rate of decrease was about 1 cubic foot per second (cfs) per year. The base flow of the river is now less than the long-term average of 25 cfs determined by the United States Geological Survey (USGS) from their Paulden stream gaging station records over the past 50 years. Monthly average flow at the USGS Paulden gage ranged between 20-25 cfs between 2007 and 2012.

The flow monitoring data summarized in the Going With the Flow report were obtained from December 2006 through March 2012. Arizona Water Sentinels volunteered hundreds of hours of time, making monthly trips to the upper Verde River to measure flow at three sites on the river. The three sites are located within the uppermost 25 miles of the Verde River at Perkinsville, Bear Siding, and above Verde Springs. Water Sentinels also compiled and analyzed flow data obtained from the USGS Paulden stream gaging station and the Salt River Project Campbell Ranch low-flow gage for this report.

"I originally volunteered to get involved in monitoring the Verde River, first water quality and then for many years water flow, because of Prescott's and Prescott Valley's plan to pump water from the Big Chino aquifer, jeopardizing the future output at the Verde Springs," said Tom Slaback, volunteer Water Sentinel for the Sierra Club. "I felt we needed to establish a baseline which in the future would allow us to note any changes in the river flow or water quality due to groundwater pumping. If 8,000 acre-feet of groundwater is removed by pumping, the river will go dry in certain locations. We cannot allow this to happen."

Summer base flow of the upper Verde River has decreased dramatically in the last five years. Water Sentinels measured record low flows of about 9 cfs in summers of 2010 and 2011 at its Perkinsville site. If current rates of decrease in summertime base flow continue unchanged, the upper Verde River could start running dry in the summer within the next 10 years.

There is a strong hydrologic connection between groundwater levels in the regional aquifers of the Big Chino Subbasin and the discharge of groundwater from the seeps and springs that create the upper Verde River.

Multiple lines of evidence documented in USGS studies show that the Big Chino Subbasin supplies approximately 80-86 percent of the groundwater creating the base flow of the upper Verde River.

There also is evidence that groundwater pumping from the Big Chino Subbasin directly affects the amount of groundwater discharged to the upper Verde River at its source, Verde Springs.

If groundwater is pumped to satisfy the projected total unmet water demand in the region in 2050, it will reduce and eventually consume the entire base flow of the upper 24 miles of the Verde River.

"Arizona should be proud of the Water Sentinels, volunteer citizen-scientists who work to protect our water quality and to restore our rivers," said Gary Beverly, Yavapai (Prescott-area) Group Chair for the Sierra Club . "In particular, the Sentinels flow measurements on the Verde River play a critical role in maintaining base flow on Arizona's longest surviving perennial river."

The Arizona Water Sentinels focused its efforts on the upper Verde River due to the threats posed by groundwater pumping from communities such as Prescott and Prescott Valley and the significant development occurring in the watershed, as well as the importance of this perennial river to the people of Arizona and the diversity of plants and animals it supports.

To view a copy of the full report, go to http://arizona.sierraclub.org/conservation/water/Going_with_the_Flow_Final_05-02-2013.pdf

For other Water Sentinels monitoring results go to http://www.arizona.sierraclub.org/conservation/water/index.asp