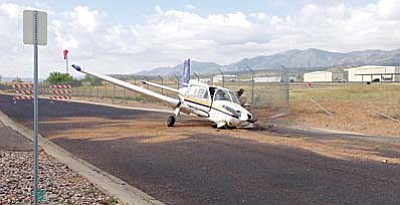 A pilot landed on Airport Road instead of the runway at Cottonwood Airport, suffering minor injuries. Courtesy Cottonwood Police

COTTONWOOD -- Throughout Tuesday morning, Cottonwood Police assisted the Federal Aviation Administration with an airplane crash on Airpark Road just north of the airstrip near West Mingus Avenue. Police were alerted about 11:30 p.m. Monday when a neighbor at Cottonwood Ranch heard a low-flying plane followed by a crashing sound.

The small plane had collided with a portion of the airport perimeter fence, bordering Airpark Road and the airport, and came to rest on Airpark Road. Cottonwood Fire Department personnel contained a fuel leak and shut down the electrical system.

The pilot, 42-year-old Kelly Thompson of Oklahoma, was transported to Verde Valley Medical Center. Although Mr. Thompson was walking around on his own at the scene, it was later learned that he sustained two broken vertebra in his neck and is now being treated at Flagstaff Medical Center.

Because of inconsistencies in paperwork, the late hour of flight and the crash parallel to the runway, a K-9 free air sniff of the exterior of the aircraft was conducted. But, the K-9 did not alert on the aircraft and no illegal substance was found.

The pilot reported he didn't believe the runway lights were functioning properly and thought Airpark Road was his runway. By the time he realized it was a roadway, he could not pull up to avoid colliding with the fence.

COTTONWOOD - Late Monday night just before 11:30 p.m. the Cottonwood Police Department got a report of a possible airplane crash at the Cottonwood Airport. The caller, who lives in the nearby Cottonwood Ranch, heard an airplane flying low, then heard a loud crashing sound.

Officers arrived they located an airplane, which had collided with a portion of the fence, bordering Airpark Road and the airport, ultimately resting on Airpark Road. Cottonwood Fire Department personnel contained a fuel leak from the airplane and verified the electrical system was shut off.

The pilot and lone occupant of the airplane, a 42-year-old man from Oklahoma, suffered only minor injuries and was transported by ambulance to the Verde Valley Medical Center for treatment.

The pilot reported he didn't think the runway lights were functioning properly and thought Airpark Road was his runway. By the time he realized it was a roadway he could not pull up to avoid colliding with the fence.

The FAA was contacted and advised they would respond later in the morning to conduct an investigation. Airpark Road is closed from the 200 block to the intersection at West Mingus Avenue.

Cottonwood officers have secured the crash scene until the preliminary investigation is complete and the airplane is removed.