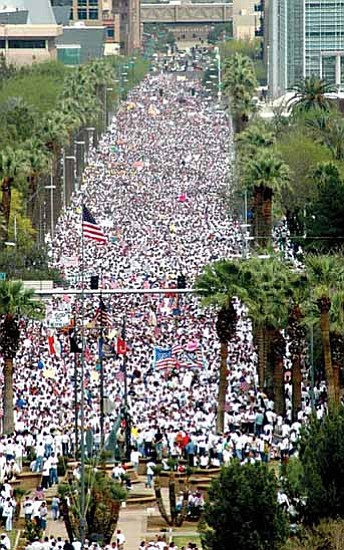 A 2010 march in protest of a new Arizona law aimed at those not in this country legally promised a big increase in Hispanic voting. But a new Census Bureau report suggests that has not happened.

PHOENIX -- Three years ago, in the wake of a new Arizona law aimed at those in the country illegally, tens of thousands converged on the Capitol with a message: Today we march, tomorrow we vote.

But new figures Wednesday from the U.S. Census Bureau suggest those efforts have had mixed results at best.

The percentage of Hispanics registered to vote for last year's election is virtually identical to what it was for the 2008 presidential race. And while the share of Hispanics who actually reported they voted was up from four years earlier, to 40.4 percent, it still trails by far the 70.5 percent voting rate of non-Hispanic Anglos.

Petra Falcon, executive director of Promise Arizona, said she has not seen the data. And Falcon, whose organization is involved in voter registration efforts in the Hispanic community, said there may be reason to question the Census Bureau's classification of who is Latino.

But she conceded that getting people who have been registered to actually go to the polls has been an ongoing struggle. The key, Falcon said, is convincing them there is a reason to vote.

Pollster Earl de Berge of Behavior Research Center said the problem there may be the message of those doing voter outreach.

"You can't expect voters to go to the polls if there's not something in it for them,' he said. "Voters vote their perceived self-interest.'

He said much of the emphasis for voter registration drives in the Hispanic community has been built on two related issues.

One is illegal immigration and the state laws passed in response, culminating in 2010 with adoption of SB 1070. That measure was designed to give state and local police more power to detain and arrest those suspected of being in this country illegally.

The other, said de Berge, has been more focused on Maricopa County Sheriff Joe Arpaio and the "crime suppression sweeps' which seem aimed at Hispanics.

He said there are certain young Latinos who are focused on those issues. But de Berge said many who were born here are more interested in things like women's issues, abortion and economics, than the immigration issues being used to get people registered.

"They leave a lot of Latinos out of the game who don't see themselves as immigrant-oriented,' de Berge said. "It's not the only thing that drives them.'

He said those who want to mobilize the Latino vote "need to cast a broader net on issues in order to bring in people who are not simply oriented either toward an anger toward Arpaio or toward a belief that we need immigration reform.'

Falcon acknowledged that anger toward Arpaio played a role in her organization's efforts. She said her group and others registered 35,000 people last year to vote in the sheriff's reelection campaign.

But she agreed that resentment, by itself, does not get people to the polls, especially if other candidates are not reaching out to the Latino community.

Francisco Heredia, national field director for Mi Familia Vota, said while immigration is important, it cannot be the sole basis to get people to register or vote.

"Not everybody gravitates to a specific campaign or a specific issue,' said Heredia, who previously headed the Arizona field office.

But State Sen. Steve Gallardo, D-Phoenix, said the significance of immigration should not be underestimated.

"Everyone out here in my district knows someone -- they're either in the family or a neighbor or someone who they go to church with -- that is struggling with this broken immigration system,' Gallardo said.

"That's what gets people fired up,' he said. "That is the tool that's been used to get people active in our political process.'

There may be one other factor in play in the lower Hispanic voter turnout: age.

The Hispanic community is heavily weighted with those who are young. And the Census Bureau reports that, in general, the younger someone is in Arizona, the less likely that person is to cast a ballot.

That gap between Hispanic and Anglo voting is not unique to Arizona. Nationally, the Latino turnout rate for last year's election was 48 percent, compared to more than 64 percent for non-Hispanic Anglos.

But both Falcon and Heredia said that tells only part of the story. They pointed out the gap in much narrower in states which were considered "in play' for the presidential race.

The difference, Heredia said, is money, with "Democrats and Republicans sometimes putting millions of dollars in resources into Latino outreach programs.'

In Nevada, for example, the gap between Hispanic and Anglo turnout was less than 7 percentage points. And it was just 5 points in the battleground state of Ohio.

"In the case for Arizona, we've been left in the dark of that national resource game on the political side, of both parties,' Heredia said.

"They just crossed off Arizona at the end to move money somewhere else,' Falcon agreed.

Nationally, the result of those party-funded efforts did bear some fruit. Polls showed that President Obama picked up 71 percent of the Hispanic vote.