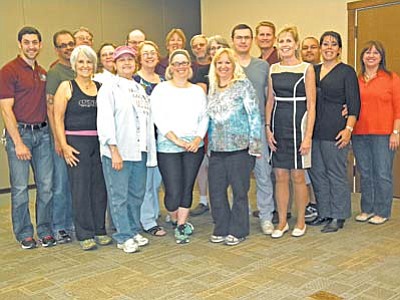 Competitors in the 4th season of Lookin' Good Cottonwood at the Cottonwood Recreation Center lost 1,900 pounds total, nearly one ton of weight loss.

That is lookin' good!

Tiffiny Zepeda dropped 54 pounds and 21.6 percent of her body mass, winning the $2,000 top prize among women. The Purple Team was the winning team with a 50.96 percent loss of their 5-member team body mass to take away the $500 first place team prize.

Richards said "control" was what won the competition for him. "The best control that I had was to control carbohydrates. I also got some help from a protein powder. Cut the bad calories from fats and carbohydrates as much as you can. Vitamins are also very important to keep the nutrition in balance. My family was a big supporter. We have to cook for each individual because my daughter is very picky. She would not give up chocolate.

"I am going to buy some clothes first," saidScott. "But part of the prize is going to my daughter's college fund."

For Zepeda, it was changing the family diet that did it.

"Me and my husband have six kids and we stopped buying chips, ice cream and soda. And we decided to eat healthier together, make healthy choices and eat at home. I started working out every day, except Sunday, a family day. When the whole family does it together. It is better."

Zepeda admits to a strong competitive streak. "Between me and my husband, we try to see who lost the most weight each week." Her husband, Francis, placed 5th among men.

The $2000 first place prize will go toward the family vacation in California and Iowa.

Suta, who said he was neck-in-neck with Richards, said 'cardio' was his biggest ally. "I spent an hour each day doing cardio and also cut portions and fast foods."

Suta reported he went from a size 38 to a size 32. He is a nurse and bought two smaller sizes of scrubs since the competition started.

"Exercise is what works for me," sad Eric Strobel, another competitor. He lost 18 percent of body weight. "I do 100 percent walking, walking 3 to 5 miles every day." Eric placed 4th in the men's division.

Trevor Faust of the Recreation Center coordinated the competition in its fourth year. He said 220 people started the contest and about 180 finished. Combined they lost a total of 1,900 pounds.

He said many participants returned for a second year to provide accountability for their weight regimen and to keep the weight off.

A health conscious meal was held for participants Wednesday evening.