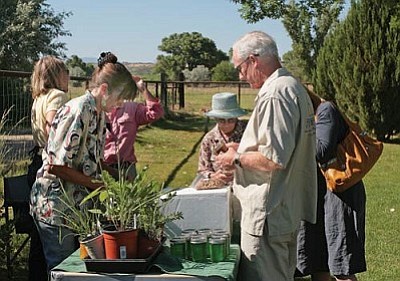 Verde Valley CSA shareholders pay $510 up front for the 22-week season. Each week, they receive a basket of six to 10 freshly picked, locally grown items from three farms. At both pickup locations, there is a small Farmers' Market selling additional produce on a rotating schedule.

According to Scantlebury, owner of Tickaboo Ranch, there are plenty of reasons to participate in the CSA.

"You'll get a higher quality of produce at a better rate than you're going to get at any market in the area," Scantlebury said. "Nutritionally, it'll be better for you. You'll be supporting a local group of farmers who are trying to make a living. And you'll be involved in a very good circle of people."

Willowbrook Farm and Tickaboo Ranch, both in Camp Verde, and Whipstone Farm in Paulden, are the participating farms for this seventh season. The farms use sustainable growing methods with no synthetic fertilizers or genetically modified organisms (GMOs).

"Community Supported Agriculture is a direct way for members of the community to buy freshly-picked, local produce and support small family farms in the area," Verde Valley CSA Director Sandy Boyce said in a statement. "We are thrilled to work together with farmers and consumers, promoting local agriculture and keeping small farms in business."

"I've been growing and selling produce in Camp Verde for 12 years," Scantlebury said. "I've sold to distributors and I've sold at one point just to restaurants."

"I enjoy the direct sales so much," Scantlebury said. "Denise and I had talked about [starting the Verde Valley CSA] for years. But we did not have the magical ingredient, which is Sandy Boyce. Somebody to do all the paperwork and dot all the I's and cross all the T's. We just get too darned busy during the growing season.

"CSA is great from a grower's perspective," Scantlebury said. "I know exactly how much to plant. I know how many customers we're going to have. I know how much I am going to give them per week. So from a planning perspective, it's great. Very little of what I grow gets wasted. And when you are growing for a Farmers' Market or for restaurants, you are at the whim of what they are going to buy that week. A CSA really allows a grower to get organized, to become a better grower, to really focus on keeping it lean, just growing what you can sell."

"We've grown garlic," said Gould, owner of Willowbrook Farm. "We've always grown a lot of garlic. We've been here for 10 years. We're very proud of that. In the last three years, my daughters have joined in."

With Gould now focusing her efforts on growing for the Verde Valley Farmers' Market, her two daughters, Hilary Barnett and Hope Barnett, have taken over the farm's CSA commitment.

"We have an unspoken understanding - because we're siblings - of quality control, of ethics," Hope said. "It's great working with Hilary that way. This [farm] was far too big for our mom to manage on her own. And Hilary really loves to grow."

"Hope and Hilary primarily grow to sell fresh," Gould said. "I'm growing now to preserve and to can."

"My mom does all the fruit around here," Hilary said. "I'm going to do okra this year; it will be the first time."

In the past six years, both Hilary and Hope have moved back to the Verde Valley. Hope spent several years in Japan. Hilary, besides living in Oregon, has traveled to South America. Growing up with a mother who loved gardening and growing food, their travels helped diversify their agricultural interests.

"I guess part of it is based on the time I spent in Asia," Hope said. "When I was in Asia, everybody had a garden. So whatever comes out the garden, they find a quick way to pickle it or to use it right away. Beets were one of those things."

"The food everywhere is so different than what you expect," Hilary said. "You go down to South America and you are thinking all the food is beans and rice, and it's not."

"And there were a lot of potatoes," Hilary said. "They also eat a lot of chicken."

"Hope is our main chef," Hilary said. "She is an excellent chef. She really has a passion for it. But I love to cook too. There's nothing better than when all the ingredients to your food are from your own garden. It's so rewarding."

"Our greens are really popular," Hilary said. "We sell a lot of chard at the market. People come there specifically for fresh greens. They are pretty. I enjoy growing those. Also the tomatoes. This year we are doing four varieties of cherry tomatoes. This year I am adding a black one. And then we'll have the yellow, the sun gold and the red. So that will make for a nice, colorful variety."

When farmers work with a CSA, according to Scantlebury, they are closer to their customers.

"You get a lot better feedback on the quality of your product," Scantlebury said.

"There is a big step between organic foods and foods bought at the grocery store," said Dena Greenwood-Miller of Rimrock, a Verde Valley CSA shareholder. "And there is a huge step between locally grown food and organic food."

"We are very pleased with the food," Greenwood-Miller said. "You eat food that is in season. You learn creative ways to prepare the food. I love being creative. You begin to think "how many ways can I prepare the food?'"

Through the Verde Valley CSA, Greenwood-Miller said she discovered sorrel, a perennial herb that is cultivated as a garden herb or leaf vegetable. "You can eat it raw," Greenwood-Miller said. "It is kind of lemony, tart. I use it to make pesto, or I put it in sandwiches."

According to Scantlebury, sorrel is a relative of the rhubarb family. "It makes a great soup," Scantlebury said. "You can sautÃ© it into sauces, make a great salad, can use it in sandwiches instead of a lettuce leaf."

"I like all of the produce that the CSA provides," said Karen Morris of Camp Verde, a Verde Valley CSA shareholder. "We are committed to getting produce weekly." According to Morris, each week she most looks forward to the lettuce.

"I enjoy eating salads most every night," Morris said. "It is wonderful getting that lettuce.

"It is nice to have local producers," she said.

"I love the okra, too," Greenwood-Miller said. "I season the okra and coat it with cornmeal, then I bake it. It's just like eating popcorn."

"We also get salad fixings most every week," Greenwood-Miller said. "We get a lot of squash, especially toward the end of summer. We make breads with them."

Though CSA subscribers mostly receive vegetables in their weekly allotments, Greenwood-Miller also enjoys the fresh fruit in her basket.

"We're not a berry-growing area," Greenwood-Miller said. "But we get apples, peaches, apricots, figs, and pomegranate. With the apples, I make applesauce, pies and muffins. With the peaches, they just don't last long around here. You can eat them so fast.

"We're learning to eat the way they did in the old days," she said. "You just eat food that is in season."

Skip Larson and his wife Terrilyn Green, of Cottonwood, have been volunteering with the Verde Valley CSA since 2009. They arrive at the Cornville pickup station each week "in advance of any producers," Larson said. "We off-load the product, we set up distribution tables and we evenly distribute the product. Then we take down at the end of the two-hour period.

"Most of the producers sell on extra tables," Larson said. "They reflect or compliment what is out there. Even though the sellers do not have an organic label, we know it is organic food. In most cases, the food that people receive was still growing earlier that day.

"At the beginning of the season, there is more variety of greens, always good for salads," Larson said. "Later, we get radishes and onions. Then, we get the fleshy vegetables, like cucumbers and tomatoes. Most are locally produced heirloom variety. Because you are getting seven or eight items each week, you are really getting a lot. You wind up with a lot of vegetables."