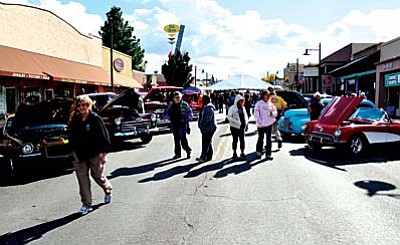 The Old Town Cottonwood Historic District will be blocked to vehicle traffic and wide open to allow for pedestrians, displays and musical acts and lots of folks in the street.

The Verde Valley celebrates Historic Highway 89a and the more than 50 years of the City of Cottonwood's incorporation with "Walkin' on Main" all day Saturday, Nov. 9.

The Old Town Cottonwood Historic District will be blocked to vehicle traffic and wide open to allow for pedestrians, displays and musical acts and lots of folks in the street.

Two big tents will shelter a juried art show, surrounded by Old Town's distinctive galleries, shops and local foods. Live music featuring some the state's best entertainers is the background for fun throughout the day.

Walkin' On Main has always been known for its entertainment. This year, two of the bands that are members of the Arizona Blues Hall of Fame: The Tommy Dukes Band and Big Nick & The Gila Monsters.

Tommy Dukes was born in Hattiesburg, Mississippi, but grew up in Winslow and has become a Northern Arizona blues legend. Tommy has entertained blues enthusiasts throughout Arizona and the U.S. and, this is not the first time The Tommy Dukes Band has played Walkin' on Main.

He learned the guitar and harmonica at 13 and, today, covers traditional blues, R&B and plus his own originals. For a decade he was a regular in Charley's Monday Night Blues night in Flagstaff.

In 1983 Tommy claimed 1st place in the Winslow "Battle of the Bands."

Tommy took second place in 1990 in the KLON FM Radio, Blues Talent Contest, Long Beach. In 1992, he was the 1st place winner of the Phoenix Blues Society talent contest and was inducted into the Arizona Blues Hall of Fame February 16th, 1997. He has played at the "Standing on the corner in Winslow Arizona" Music Festival for several years. In 2003 & 2004 he placed second in the Phoenix Blues Society Blues Contest. In 2005, Tommy placed second in the Sonny Boy Blues Festival in Helena, Arkansas. And in 2006, Tommy Dukes & the Soul Kings won second place in the Phoenix Blues Society's Blues Contest and went on to Memphis, Tennessee, to the International Blues Challenge, February 2007.

Big Nick & The Gila Monsters - John "Big Nick" Samora has been playing in Phoenix for the last 20 years. For 16 years of those years he has been lead singer and harmonica in his own band, Big Nick and the Gila Monsters, one of the best blues bands in Arizona.

Mike "El Rey" Lewis is considered one of the finest guitar players in Phoenix, having cut his teeth with Chuck Berry in the late 1960s.

James "Muddy" Mason has been the cornerstone of dozens of landmark acts in the Phoenix area since the mid '60s and is a Phoenix treasure.

Together since 1994, the stability of this group has been one of it's hallmarks. Bobby Whiteshoes, the founding drummer, passed the sticks to pro-drummer, Ricky J. Lockhart, when he retired in 2004. Ricky has picked up the torch, laying down the solid grooves this great blues band.

The Gila Monsters have 5 self produced CD's under their own label, Monster-Tone Records, these guys are the real deal.

Singer-songwriter, Blaine Long was born in West Virginia and raised in Arizona, Blaine was a high school dropout who had to learn the hard way, from serving up fast food to digging ditches. But Blaine discovered guitar, singing, and especially songwriting and fronted an original Tempe-based band in the 90s.  When the band broke up, he continued as a solo act, singing and playing at coffee shops and bars, in Boulder, San Diego, Los Angeles, or wherever music would take him, eventually returning to Arizona, playing his original songs for a living.

For five years, Blaine has released a new album per year. Today, Blaine Long's music is marked by warm and soulful vocals and a powerful rhythmic acoustic guitar style. You can find Blaine on most nights, whether in Arizona or on tour, working on his craft in front of a live audience.

The art show is a key part of the Walkin' on Main street festival.  This year's theme explores traditional and contemporary artwork inspired by one of America's most scenic routes, Arizona's Historic State Route 89a.

"We are finding new ways to highlight artists who work and live in the Verde Valley" explains festival coordinator Hezekiah Allen. "This year we expanded art categories to include photography, added a monetary prize, and coordinated the possibility for selected artists to display their work longer."

In addition to the juried show, the Mingus Union art department will create sidewalk chalk art right before your eyes.

The Verde Valley has become known for its wines, a tradition that was established before Prohibition, but has been revived with new exotic vines since 2000.

"In 1874 soldiers from Camp Verde were stationed at an adobe house along the river even before Cottonwood was named. The town was founded in 1879.

Among the first settlers was Charles Willard. Willard and others founded a market for their crops, hay and grain in Camp Verde and later in Jerome where a rich vein of copper ore was found.

By March of 1917 Cottonwood was booming.

There was not another town in the U.S. that could boast so many business houses for a population of 1000 by 1925. Cottonwood was known as "the Biggest Little Town in the State of Arizona." It even made a name for bootlegging during Prohibition.