State's border fence plan may be headed for scrap heap 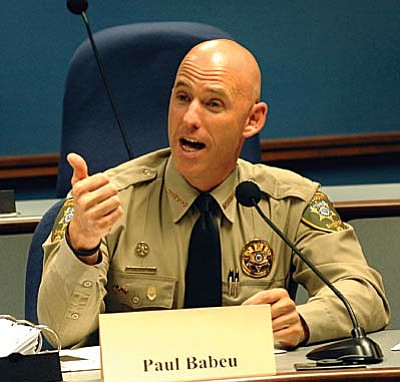 Pinal County Sheriff Paul Babeu lashes out Wednesday at Congress and federal immigration officials for failing to secure the border while discussing an immigration reform proposal. Babeu told a legislative committee the border could be secured if there were the political will to do it. (Capitol Media Services photo by Howard Fischer)

PHOENIX -- A legislative panel may be ready to jettison plans to try to build a border fence, having gathered less than $265,000 in donations over three years.

Rep. David Stevens, R-Sierra Vista, co-chair of the committee, said Wednesday that the original plan, approved by lawmakers in 2011, may be unworkable. It envisioned a new fence on private property, with the consent of landowners, which could cover about a third of the 370-mile international border.

"We're trying to find out what the options are,' Stevens said. In fact, there had been plans for a closed-door session of the panel to get legal advice on what the law permits until it was pointed out there was not the necessary public notice.

But Rep. Steve Smith, R-Maricopa, who pushed through the original legislation creating the panel and allowing it to seek donations, insisted that building a barrier on private land adjacent to the border remains an option -- even if it's just a small stretch.

He said if a barrier prevents people from crossing illegally even over just one or two miles, that will prove the concept works. And that, Smith said, should generate more offers of cash, supplies and labor.

"We told you, we're working on a plan,' said Sen. Gail Griffin, R-Hereford, the other co-chair of the panel. Pushed for specifics, she said, "we'll get back to you.'

The move pushing back any decision on what to do with the funds came after more than two hours of testimony, mostly from a border-area rancher who detailed having to sleep with a gun near his bed and a former Border Patrol officer who said the Department of Homeland Security is lying about securing the international frontier.

And the sheriffs of Cochise, Pinal and Yuma counties, who also serve on the committee, expressed their own frustration with what they see as a failure at a federal level.

The 2011 legislation allowed the state to start taking donations to build a fence. Proponents, led by Smith, said they were frustrated by the lack of true barriers, with many stretches of the international border guarded only with barbed wire.

From the beginning, cost was a question, with the federal government having spent in the neighborhood of $3 million a mile for fences designed to keep people and vehicles out.

But Smith insisted at the time the state could raise sufficient dollars through donations. And Sen. Al Melvin, R-Tucson, even suggested the use of inmate labor.

Now, more than two years into the project -- and with donations having slowed to a trickle -- the committee has to figure out what to do next.

There may not be a lot.

The 2011 law empowers the committee to take testimony, analyze border crossing and crime statistics, make recommendations to increase border security and "administer and manage the construction and maintenance of the border fence.' That's why Stevens wants a closed-door session with a lawyer from the state Attorney General's Office to see if there are other -- perhaps better -- ways to spend the cash available.

"Are you going to buy a Global Hawk drone? No, because they're multi million dollars,' Steven said. But he said a Pioneer 100 drone might be within the price range of what the state can afford "if that's what you want to do.'

Ideally, Stevens said, the state would have $300 million to spend "because then we'd end up building the fence.'

But Stevens was reticent to declare on Wednesday that the original goal of building a fence was now off the table.

"I don't know what it costs to build a fence,' Stevens said, saying he wants to defer to Smith.

And Smith said he still thinks a barrier of some sort remains an option.

He cited the testimony of rancher Jim Chilton whose ranch includes a 5.5 mile span along the border.

"To survive, we are forced to share our land with the Mexican drug cartel,' Chilton told the committee. "We live with weapons near our bed, guns at our doors, guns in our vehicles and guns attached to our saddles.'

Chilton said he gets the drug traffic because while the federal government has built improved fences along some stretches of the border there is a 25-mile gap between what was constructed near Nogales and what went up near Sasabe.

Smith suggested after the hearing the Chilton ranch might be a good place to test the idea of a fence. He said sealing off several miles there would protect Chilton.

He conceded they could still go around. But Smith insisted that the success of the first stretch will generate the necessary publicity -- and dollars -- to build a few more miles, and a few more miles after that.

Former Border Patrol agent Tom Crosby told lawmakers his own theories about why the border has not been secured. He said part of that is "globalist philosophies' by "progressives (who) have absolutely no interest in securing the border.'

Crosby, now a member of the Sierra Vista city council, also said the Obama administration and the press "are intentionally practicing political deception' about the lack of border security. He also added his voice to those of border sheriffs who are opposed to S 744, the Senate-passed federal measure on immigration reform co-sponsored by Jeff Flake and John McCain, Arizona's two senators, with a particular focus on what he called the "amnesty' provision allowing those already here illegally to remain.

"Is it a good idea to legalize people who hate us?' Crosby said, focusing on largely on the Muslim community. He said while the majority may be peaceful, they are "cowed and extraneous' by more radical elements.