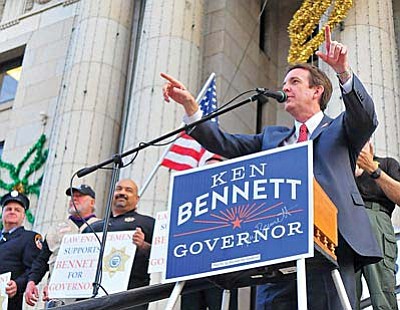 PRESCOTT - Ken Bennett climbed the north steps of the Yavapai County Courthouse Tuesday to officially announce his candidacy for governor.

While it's a popular place for candidates for local, state and national offices to announce their intentions, Bennett has climbed those steps more than all or most of the others.

He reminisced Tuesday about being chosen to sound the pitch pipe for Christmas songs during the Courthouse Lighting Ceremony when he was a Prescott High School senior. For the last few decades he has read passages from the Bible for that same ceremony.

And of course, it wasn't the first time he'd announced his candidacy for elected office on those steps, either. He has served on the Prescott City Council, served as president of the Arizona Senate from Prescott, and currently serves as Secretary of State.

"I think it's time we brought somebody in that's proven their leadership," Yavapai County Supervisor Chip Davis said when introducing Bennett to the crowd. Davis' family has known the Bennett family for three generations.

If elected next fall, Bennett would be only the fifth Arizona governor who is a native of the Copper State. The first native-born governor and the only one who hailed from Yavapai County was Thomas Campbell, born in Prescott in 1878.

Bennett told a crowd of about 200 supporters, friends, Bennett Oil employees and family that the word "serve" is important to him. The only way to lead is through service, he said.

He talked about the four generations of his Arizona family, and how his family ended up in Prescott when his grandparents moved here. His parents, wife, children and sisters were in the audience while his brother-in-law Brad Nelson circled the courthouse with a campaign truck.

"I am so proud to be a Prescott boy, and will always be," he said.

His sister Lisa Johnson said she just moved back to Prescott and her brother already fixed her faucet.

Davis wore a bolo tie that featured Arizona's 1963 territorial centennial token and a tiny matching sign that said "I'm for Barry." Barry Goldwater announced his candidacy for U.S. president on the Yavapai County Courthouse steps in 1963.

That was the same year Bennett's grandfather was a Smoki chief and made Goldwater an honorary chief on the same steps, Bennett related after his speech.

"I've signed the front of checks, not just the backs," Bennett said as he talked about the need to support existing and new businesses so children can stay here when they grow up. A former member of the Arizona Board of Education, he also emphasized the need for quality education for an educated workforce.

Several Prescott City Council members were there to show their support for Bennett.

"I think he's the kind of leader Arizona needs right now," Prescott Council Member Charlie Arnold said, recalling how Bennett talked to his high school civics class and has always been available to talk to groups such as the American Legion's Boys State citizenship program.

"I think Ken learned how to work with the whole state when he was president of the Senate and secretary of state," Prescott Council Member Jim Lamerson said.

Several others cited Bennett's experience in government and business, too.

"He's got the legislative process down, and represents the whole state as well," said Dave Maurer, who is Prescott's Chamber director although he noted he was there representing only himself.

"We listened to him speak recently, and he was very straightforward and honest and represented himself very well," supporter Maxine Tinney of Prescott said as she held a campaign sign.

"To me, he represents the spirit of Prescott and Arizona as a whole," her husband Bob Tinney added. "I just felt like he was a person you could trust."

Several police officers stood behind Bennett on the courthouse steps with campaign signs including Tixoc Muñoz, president of the Arizona Correctional Peace Officers Association. As Senate president, Bennett was integral to balancing the state's 2006 budget without gimmicks while cutting taxes, Muñoz said.

A lone firefighter named Joe Torrillo also stood behind Bennett. He was one of the few FDNY firefighters who survived in the collapsed World Trade Center on 9/11, and he met Bennett at the Veterans Day parade in Phoenix.

"Coming from New York City, I can smell a phony," Torrillo said, adding Bennett is not one of them.

Bennett also announced his candidacy Tuesday in the only two other cities that also have served as the territorial or state capital, Tucson and Phoenix.