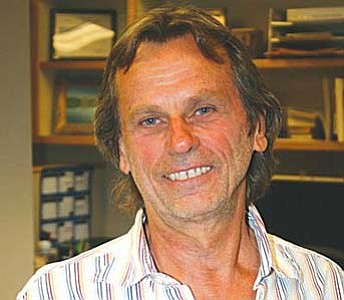 Rennie Radoccia: “My agenda is to help and protect the people of the town of Clarkdale, and to think that this issue and cell towers have been just glossed over as, maybe this is a problem, is unbelievable to me.”

The Clarkdale Town Council voted 4-1 to scrap two letters to the Arizona Corporation Commission expressing concerns regarding the safety of APS smart meters and the proposed fees associated with opting out.

Councilman Rennie Radoccia first brought the issue to the council's attention in October, and walked out of the meeting shortly after the letters were voted down Tuesday night.

Smart meters will be deployed in Clarkdale starting early next year. A movement that started in Sedona and has picked up an organized following in Cottonwood claims there are safety and privacy issues associated with digital meters.

APS has installed about 1.1 million smart meters in Arizona since 2005. The utility has replaced analog meters that require readers to travel from home to home, collecting data on each home's energy use to generate a monthly bill.

In contrast, a smart meter contains a 900-MHz radio that transmits usage data to APS throughout the day. These radios meet FCC guidelines for safety, and several studies show they emit radio frequencies no stronger than a baby monitor and several times weaker than a cell phone.

Continuing to send meter readers to the few houses that opt out will come with costs, which will be borne by a smaller proportion of customers. APS is asking the ACC to approve a $75 upfront charge to opt out, followed by a monthly $30 fee.

Councilman Bill Regner read a prepared statement during the meeting that said the leadership and staff in Clarkdale has worked diligently to use legitimate science to promote its sustainable culture, from wastewater management to the Verde River. This has earned the town credibility and trust among its residents, which may disappear if the council begins to appear "radicalized."

While sharing concerns about safety and the high cost of opting out, he said a letter from the town would be worth possibly diminishing Clarkdale's record on making policy decisions based on data "gathered according to a set of scientific principles that when examined objectively allow a conclusion that makes sense to a majority of those who seek to understand it.

"I do not support any action that might call into question Clarkdale's legitimately obtained credibility in the scientific community and our local residents that has been so carefully thought out, nurtured and presented by the leadership of this council and town staff," he said.

After small changes were recommended to the letters, members of the audience were invited to share their opinions with the council. Many had been present at the Oct. 8 council meeting when the issue was first discussed, and echoed previous arguments about health, privacy and opt-out costs.

A representative from the neighborhood on Hollow Reed Lane said the area as a whole is opting out of smart meters, which Von Gausig pointed to as an option for residents.

Von Gausig said one of the U.S. Department of Energy's goals is to have a nationwide smart grid, which will cut down on the consumption of fossil fuels by using data from digital meters to react more quickly to dips and spikes in energy needs.

"The benefit of that grid outweighs any kind of negative impact that I have been able to substantiate that had to do with smart meters," Von Gausig said. "I understand absolutely the public's desire to have a reasonable charge for meters being read."

The smart grid may lead to sustainability, but the right technology to broadcast usage information is not being used, opponents argued.

"It needs to be put on hold," Radoccia said. "For those who have weak immune systems and people who are subject to infiltration of things that others aren't, this is a threatening thing."

Councilman Curtis Bohall said he and most others don't know if smart meters are harmful.

"I don't feel qualified to make those kinds of decisions for somebody else," he said.

Radoccia moved that the council accept a letter that he drafted, but was not seconded.

The ACC requested the Arizona Department of Health Services conduct a study to determine whether smart meters were safe, which was pointed to as evidence that not enough was known about the technology.

Dehnert said the gist of both letters is that the ACC should wait for the report from ADHS before making a decision on continued deployment and what the charge would be. He polled the audience to see if people would accept smart meters if ADHS found them safe, and nobody came forward.

There are some people with non-medical and non-scientific reasons to promote the fear associated with smart meters, he said.

"There is a lot of money being made, not only by Arizona Public Service and other utilities utilizing that technology, but by other people who are propagandizing against it and instilling fear in people that their health is being threatened by this," Dehnert said. "It seems like about 75 percent of the articles that are damning smart meter technology also happen to offer a book, or a DVD, or, in many cases, some sort of device that you can put on your smart meter to keep it from hurting you."

He said he agreed with Regner that this is an issue for someone else to decide.

"We could make a show of putting out a letter that says this is very dangerous and we don't want you to do it to our people, but we would be pandering to a small group of people who have decided that this is a really big deal and that they're scared to death of it in order for us to feel better about having people in our audience that might be mad at us when we finally make a decision," Dehnert said. "I don't think that's a good reason to do anything."

The night's discussion and further consideration of what impact either letter would have swayed Dehnert against any action, he said.

"This is above our area of expertise, and I don't think it would do the town of Clarkdale or its residents any good for us to send either one of these letters," Dehnert said.

After moving that neither letter be sent and receiving a second from Regner, Von Gausig asked if there was anything further. Radoccia said this was a "huge mistake."

"That thought process has got so many holes in it, Richard," Radoccia said.

Radoccia said he was shocked that the council would move to not send one of the letters.

"To turn our backs on it and to say we're going to have no effect by sending either one of these letters is the coward's way out," Radoccia said. "It's just ignoring the situation hoping it's going to turn up one way or another and we're just going to sit around and take it in the chin."

"If you consider it cowardly to make an unpopular decision in the face of a group that is this adamant about their position, then you go ahead and listen to them," Dehnert said.

In September, the council decided against Radoccia's recommendation that cell towers be prohibited in the town's historic district.

"I'm blown out of the water by the way this council has taken this, cell towers," Radoccia said. "It goes against everything that I believe in, every reason I came and decided to give my time to this town one more time to sit on this council has to do with those two issues."

"It's interesting that that was your agenda," Von Gausig said.

"My agenda is to help and protect the people of the town of Clarkdale, and to think that this issue and cell towers have been just glossed over as, maybe this is a problem, is unbelievable to me," Radoccia said.