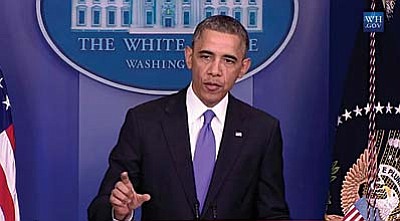 President Barack Obama announced steps Thursday aimed at letting people keep their health insurance coverage, which some people have lost because of changes under the health care reform act. The announcement comes as disappointing enrollment numbers under the law were revealed. (Photo courtesy the White House)

WASHINGTON - Only 739 Arizona residents signed up for health insurance in the first month after the troubled health insurance marketplace went online, according to numbers released this week on the centerpiece of the Affordable Care Act.

The Department of Health and Human Services said that 106,185 people nationwide had enrolled between Oct. 1 and Nov. 2, well shy of the 7 million that the Congressional Budget Office has estimated need to sign up in the first year.

And the report said that most of those who did enroll - almost 80,000 people - signed up through state-run websites and not the federally run site, which froze, crashed or had other well-publicized problems after its rollout. Arizona does not run its own site but relies on the federal site.

"I think it's fair to say that the rollout has been rough so far," President Barack Obama said Thursday of the health care reform marketplaces.

His comments came as he announced an extension of the Affordable Care Act's "grandfather clause" that should let millions of Americans keep their current health plans in 2014 or re-enroll in plans that have been canceled because of the law.

Obama promised repeatedly during the push for the law that people would be able to keep their existing health plans if they liked them, but insurers recently started dropping policies that did not meet the tougher standards of the new law.

The president "is taking a lot of heat" over that promise, said Christina Corieri, health-care policy analyst for the Goldwater Institute. She claimed that for every person who has signed up for a new policy so far, another 50 have had their old policies dropped because of the law.

The number who signed up in Arizona, she said, is "incredibly low."

"You could essentially put them all into Gammage Auditorium and you'd still have it over 75 percent empty," Corieri said.

But Cheryl O'Donnell said that she was actually surprised by how high the enrollment numbers are, not how low.

O'Donnell is the Arizona Director for Enroll America, a nonprofit whose mission is to maximize enrollment in health care insurance under the Affordable Care Act. It will take time for the system to get going, she said.

"This was the start of something new," she said. "There's a six-month open enrollment period and I think we knew going into this that people weren't going to do this on Oct. 1."

O'Donnell said it was "encouraging" to see that more than 17,000 applications had been submitted in Arizona through the online marketplace. Those applications represent nearly 33,000 Arizonans seeking health insurance on the federal exchange. And those numbers do not include paper applications that had not been entered online, she said.

"There's still well over 32,000 people that are now ... in the education process" trying to choose the right plan to enroll in, O'Donnell said.

The HHS report also does not include Arizonans who have become eligible for Medicaid under the law and who applied for coverage directly through the state's Health-e-Arizona Plus website, O'Donnell said.

But Corieri said she suspects that the "young healthies" who are needed to keep premiums low by offsetting the costs of covering older and sicker people in the program are not among those who have signed up so far.

"They haven't released full demographics, but the people who need care, who might have been blocked out because of pre-existing conditions, are probably the ones who have signed up," Corieri said, adding that younger consumers are "probably, frankly, frustrated with the technological problems."

That potential concentration of higher-risk consumers in the marketplace is a concern for Rep. David Schweikert, R-Scottsdale, who said it's "still too early to truly understand the cascade effects" that could result if enrollment remains low.

"Actuaries are very concerned that the concentration will result in higher premiums, less access and fewer options," Schweikert said Thursday.

In other words, exactly the opposite of what the law was intended to accomplish.

Schweikert said Republicans, who have been called alarmists for their warnings about the health-care bill, have been "vindicated" by the enrollment numbers released this week.

But Edwin Park, vice president for health at the Center on Budget and Policy Priorities, said the pent-up demand of higher-risk consumers is already "baked into the cake" - the law puts measures in place to compensate for early enrollment of sicker people.

The success of the law cannot be determined from the results of the first 30 days and could take years to be fully realized, he said, with "steady-state enrollment" in the marketplace plans not expected until 2017 or later.

"The numbers are dismally low," Gosar said. "This is a flawed program, a flawed process ... It won't work and America will rise up and say, 'No more.'"

The Department of Health and Human Services report tracks the number of people who have submitted applications to determine if they are eligible to enroll in health insurance plans, on both the state and federally facilitated marketplaces. It said that from Oct. 1 to Nov. 2:

Individuals represented by those applications

Total eligible to enroll in a marketplace plan

Eligible to enroll in a plan with financial assistance

Determined eligible for Medicaid/CHIP by the marketplace

People who have selected a marketplace plan

* Does not include another 259,107 paper and call-center applications that were not submitted through the online portal.
Report a Typo Contact
Sign up for our e-News Alerts
Most Read
7 days
30 days

Obamacare enrollment reopens; language, outreach among hurdles
As national debate looms, Arizona's KidsCare freeze puts it in spotlight
Arizona leads nation in children signed up for 'Obamacare'
Arizonans go for the gold - and platinum - in the health-care marketplace
Obamacare premiums low in Arizona - depending on where you live
Event Calendar