Girls basketball comes together in scrimmage 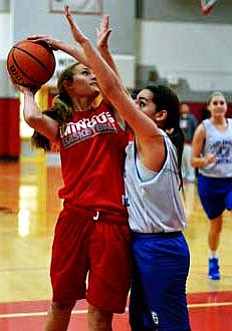 Senior Amber Rippy throws up a shot over a Joy Christian defender during the Marauders scrimmage. VVN/Travis Guy

Hosting Shadow Mountain and Joy Christian High School for scrimmages, the Mingus Union girls' basketball team showed above all, they are an athletic and physical team, even if there is still some growing to do as a basketball team.

"I was satisfied, for the competition that we were playing," said assistant coach Dave Moncibaez.

The Marauders first squared off with the Shadow Mountain Matadors. The Matadors, a senior-heavy team like Mingus Union, showed off their experience against the girls in the first half. While no score was kept, it would not have been a pretty sight as the "half-time" buzzer rang.

"Shadow Mountain's a tough team and I think the girls adjusted really well to them," Moncibaez said. "Considering that we're down a couple players with illnesses and injuries, I think the girls came together and did a good job."

As the teams returned to the court for the third stanza, the Marauders were able to make adjustments, like going to man-coverage, to have better success against the visiting team.

"They're a quick, physical team, so we tried to bang with them," Moncibaez said. "Heather played tough underneath; Sharon Rehborg gave us some good minutes. All in all, it was a good team effort."

Following the first scrimmage, the girls rested up while Shadow Mountain scrimmaged the Joy Christian Eagles.

After the middle scrimmage, the Matadors packed up their things and got on the bus back to Phoenix while the Marauders and Eagles warmed up for the final scrimmage of the night.

On paper, it would seem as though the Eagles would be a stiff challenge for the Marauders. Joy Christian lost three seniors from a team that made it to the second round of the Division-IV state tournament and finished with a 22-7 overall record.

But on the court, the Marauders bullied the Eagles. They were the quicker team and more noticeably, they were the more physical team. Big's Calandra and Rehborg were able to disrupt Joy Christian's smaller players when they were battling around the net.

Senior Danielle Valenzuela showed that if she is able to find her shot from behind the arc she is a deadly threat, sinking three three-pointers in a row. But just as quickly as Valenzuela heated up, she cooled down.

"When she was in there, she was giving us some good minute," Moncibaez said. "She made, I think, three big threes. That's a nine-point swing right there. She was on, and when she's on, she can definitely hurt teams."

During the Joy Christian scrimmage, Moncibaez subbed out most of his veteran players and let his three sophomores get a feel for basketball on the varsity level. Lisa Jaimes, Rehborg and Vivian Koeppe all received significant minutes against the Eagles. Of the three sophomores, Rehborg will see the majority of the minutes, splitting time with Calandra.

"Vivian Koeppe and Lisa Jaimes, never been in this offense, we brought them up from JV and I think they adjusted quite well," Moncibaez said. "Kylie Streck gave us some good, quality minutes, she hardly got out. She saw the floor the majority of the time."

Not all was positive for the Marauders. During the fist half of the scrimmage with Shadow Mountain, poor passes led to the Matadors controlling the action. They were able to remedy that against the Eagles, but flashes of the lackluster passing still lingered.

The Marauders were without two of their seniors at the scrimmage also. Seniors Lexi Kleinman and Angel Chavez were both sidelined. Kleinman was kept out of her uniform due to an illness. As for Chavez, she broke her hand in practice and is out until late December. Being a four-year varsity player, her knowledge and skill will be missed on the court, but this also gives Jaimes and Koeppe a chance to play more varsity minutes.

"A blow, but an opportunity," Moncibaez said. "We've got to learn to play without sometimes, and in this case we've got to play without her. She's definitely an asset to the team, but we've just got to come together and move forward, and when she comes back, we're just going to be that much better."

Moncibaez said that the biggest thing that came out of the scrimmages was that the girls started to come together.

"During this time we're expecting them to come together," Moncibaez said. "Finally being on the court as one, getting those subs in and getting good quality minutes, I think our expectations were met in that aspect."

Now the Marauders prepare for their official first games at the Queen Creek Turkey Shootout, Nov. 25 and 26. Following the tournament, the girls and boys basketball teams kickoff the regular season by hosting the Scorpions from Sedona Red Rock. The girls take to the court at 5:30 p.m. and are followed by the boys at 7.