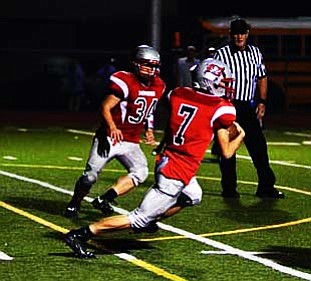 Senior quarterback Micah Nevarez (7) takes off on a run during a Mingus Union home game. At Bradshaw, Nevarez ran for on 13 carries, and went 12-for-20 for 151 yards. VVN/Travis Guy

The performances keep getting better, but a banner night from senior shot caller Micah Nevarez and a defense finding its stride was not enough to upend the Bradshaw Mountain Bears, who dropped the Mingus Union football team 14-8.

"Micah did a great job, he kept us in the game," said head coach Bob Young. "That was by far his best game."

Against the Bears, Nevarez tallied his second game of throwing for over 150-yards and finishing with a completion percentage of .600 or better. The senior threw for 151-yards, going 12-for-20, and also led the team in rushing by adding 13 carries for 49 yards.

The Marauders' defense held the Bears scoreless through the second and fourth quarters and while the numbers the defense put up may not have been as impressive as other games, the Marauders seem to be finding their stride against opposing offenses.

"Defensively we played great," Young said. "It was a good football game. Both defenses dominated. Their first score came off a kickoff return, and then they got one score in the third quarter. Other than that, our defense played very well."

Assisting Broyles on defense was senior Alec Eppinger, who notched six tackles, including 1.5-sacks for a loss of 9-yards. Helping out Eppinger with the half-sack was senior Marshall Shill (who also recovered a fumble), and sophomore Zach Simmons earned a sack of his own.

It was not just the Mingus defense that was impressive; Bradshaw Mountain's defense was able to hold the Marauders to one score for the game. The visiting team's lone score came on a game opening drive from deep on the Marauders' side of the field to just up to the Bears' end zone.

From there, Broyles, who ran for 35-yards on six tries, scampered into the end zone to pick up the points. The only other points Mingus would add to its score would be after senior Brennan Kitchen scored a first half safety on Bradshaw's quarterback.

While the offense only managed 6-points, the running backs totaled their third consecutive 200-plus-yard contest with 211-yards on 61 carries. In addition to Nevarez's rushes, senior Dakota Hanks tallied 47-yards on 19 carries. Fellow senior Brennan Kitchen chipped in another 35-yards on 12 carries and led the team in receiving with four receptions for 46 yards. Seniors Felix Vera and Tanner Caron both earned over 30-yards as receivers with 38 and 36, respectively.

Despite the production, Young said that, as a whole, the offense needs to improve its run blocking and execution. The team was not "blocking very well" the biggest thing to work on is "just execution."

"The line, the backs, receivers, we're just breaking down at the point of contact and we've got to continue to get better," Young said. "It's frustrating, we've got guys that can do things, but we're not able to because we're breaking down."

The Marauders are off to a 1-4 start. The program's lone win came in the game before Bradshaw, when the Marauders routed North High School 33-6. Mingus Union's next chance to add to its win column will come on Oct. 4, at 7 p.m. at home. The Marauders will be hosting the Flagstaff High School Eagles for homecoming.

"We're just trying to get better," Young said. "Defensively we feel like we're improving all the time. Special teams and offense, that's where we lost the game last Friday. We're hoping to continue to get better on defense and improve on offense and special teams."