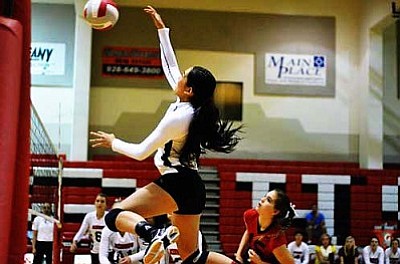 Senior Angel Chavez nails a kill during a match. Chavez is one of the Marauders’ two captains on the team. VVN/Travis Guy

After dropping a winnable game against Coconino High School, the Mingus Union volleyball team appears to have turned the corner.

First it was the girls' sloppy, yet complete, 3-set win over River Valley. The Marauders followed that match up by traveling to Bullhead City to square off against the Mohave High School Thunderbirds, who the Marauders swept in straight sets 3­-0.

"It went really well," said head coach Amanda Puckett. "We played really well as a team and struggled a little bit in the second game, where we weren't communicating, but we figured it our. I still think it's a mental game. Once they figure out what they need to do, they'll play a lot better."

Over the summer, Puckett established senior Aubrea Tuell as the new setter, with fellow senior Angel Chavez occasionally helping with the second hit duties. While the adjustment has led to some growing pains, the hitters have begun to build a rhythm with their setters.

"We're still connecting with our middles very well, and that's one thing I want them to focus on, connecting with the middles and making better decisions as setters, and they're finally doing that," Puckett said.

With the win, the girls move to 7-6 on the season and 2-0 in Division-III, Section-III. While the two teams that Mingus has beaten in conference are the D-III, S-III bottom-feeders, River Valley is last and Mohave is just above them, the two games provided the girls with some much needed confidence.

Since volleyball's first win nearly two weeks ago, the girls have gone 7­-3, including a 4-3 tournament record at the Wolves Classic Invitational. Now the Marauders enter the meat of their season. Of the remaining 10 games, only two are non-conference contests.

Two teams the girls will face, Estrella Foothills and Youngker, have already lost to them. At the Wolves Classic, the Marauders notched 2-1 wins over both schools. Mingus Union is one of three undefeated teams in its conference, the other two are third place Estrella Foothills (1-0) and first place Cactus High School (4-0). Come Oct. 31, the day after the Marauders final regular season match, the girls have to be sure to be one of the top-16 teams in the division.

With the girls seem to be connecting with each other and building more steam with each match, there is a chance for the Marauders to continue their seasons into November.

"I think that as our season goes on, we're polishing things up, so I think we're just getting better from here," Puckett said.