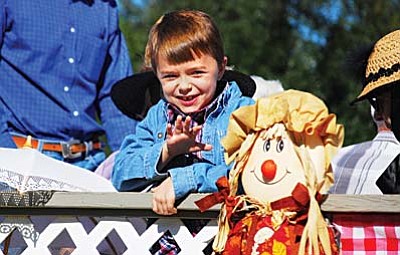 Fort Verde Days celebrates its 57th birthday this weekend, with the carnival kicking off at 4 p.m. Friday on the soccer field behind Town Hall.

The carnival will be open until 11 p.m. and will also be open on Saturday and Sunday. Carnival tickets cost $18 at the gate. Pre-sale tickets are available prior to Friday for $11 at the Bashas' in Camp Verde, Camp Verde Feeds, Sweet Grace Emporium and Sweet Grace Restaurant.

For this year's parade, Camp Verde Promotions and volunteer Sharon Doran wanted to recognize the agencies that take care of our natural resources. So the U.S. Forest Service, Arizona Game and Fish Department, National Parks Service and Arizona State Parks have been named as grand marshals of the Fort Verde Days Parade. The theme of this year's parade is "Celebrating Verde Valley Natural Resources.

Saturday's parade starts at 10 a.m. Parade entrants are to meet no later than 9:15 a.m. in the Bashas' parking lot. The entry feel is $10. Entrants will be judged in various categories, with awards given to the best in each category.

The Camp Verde Community Library has teamed up with Camp Verde Library Endowment and Camp Verde Promotions to host Creator Faire, a part of this year's Fort Verde Days.

Creator Faire will showcase people in the community who have traditional skills, knowledge, and/or innovative or creative ideas that may or may not have a forum for expression or development.

For more information, or to participate in the first Creator Faire, contact the Camp Verde Community Library at (928) 554-8380 or email library director Kathy Hellman at Kathy.Hellman@campverde.az.gov.

Earlier this year, seven Camp Verde quilters created a coverlet they call "The Quilter's Library." On Sunday, the ladies will raffle off the quilt. Proceeds from the raffle will be donated to the Camp Verde Community Library. For more information, call (928) 567-6891.

Bread of Life Mission is also holding a Fort Verde Days raffle, as the non-profit raises money to feed Verde Valley's hungry. Items to be raffled off include a motorcycle, 27-inch television, gift certificates and other prizes from various local businesses. The drawing will be held at 6 p.m. at the Bread of Life Mission booth. Winners need not be present. For more information, call (928) 567-6931 or (928) 300-2372.

This year, Fort Verde Days Art Show begins after Saturday's parade and will be open until 6 p.m. and from 10 a.m. to 4 p.m. on Sunday. The show's opening reception will begin at 5:30 p.m. Friday and will be the first opportunity to see the show and meet with participating artists.

For more information about the art show, contact Stephanie Peters at (928) 567-7033 or email: campverdeartscouncil@gmail.com.