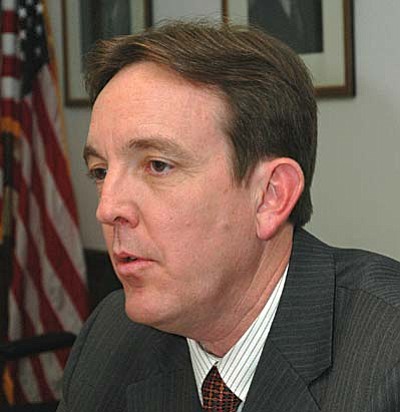 Secretary of State Ken Bennett conceded that is likely to create a bit of a headache for county election officials. They will have to either maintain entirely separate voter registration rolls or, at the very least, have a special “flag’’ on those who signed up to vote without providing citizenship proof.

PHOENIX -- Secretary of State Ken Bennett is directing election officials to separate their federal election ballots from state and local races to keep those who cannot prove citizenship from voting in the latter.

Arizona voters mandated such proof in 2004. But the U.S. Supreme Court concluded that Congress was entitled to require states to accept the federally designed registration form.

But Horne said Monday he believes that directive applies only to elections for federal offices like the president and congressional races. That, Horne said, frees Arizona to apply its proof-of-citizenship mandate for anyone who wants to vote for anything from governor and legislator to city council and school board candidates.

What that also means, Horne said, is those who register with the federal form and do not provide citizenship proof also cannot sign petitions, whether to nominate someone for office, put a question on the ballot or recall a sitting state or local official.

Bennett conceded that is likely to create a bit of a headache for county election officials. They will have to either maintain entirely separate voter registration rolls or, at the very least, have a special "flag' on those who signed up to vote without providing citizenship proof.

He estimated there are "a few thousand people statewide' who are in that category out of nearly 3.2 million registered voters.

Potentially more troublesome, county officials they will have to print up separate ballots for each polling place that have only the federal races on them.

Bennett said, though, his office has no choice if it is to enforce that 2004 voter mandate -- at least to the extent legally possible.

"It will be an extra burden we'd rather not have to be dealing with,' he said. "But sometimes you have to do things because the courts have said things that are a little different than what the people have said.

That legal fight stems from that 2004 ballot measure which requires both proof of citizenship to register to vote and showing identification at the polls. Accepted documents include a birth certificate, passport or Arizona driver's license issued after 1996 when the state began demanding proof of legal presence in this country.

Appellate judges ruled, however, state election officials cannot refuse to accept a voter registration form that Congress directed the federal Election Assistance Commission to design. That form has no citizenship-proof requirement, instead requiring only that those seeking to register swear, under penalty of perjury, that they are citizens.

In June, the U.S. Supreme Court rebuffed Horne's attempt to say Arizona can add proof-of-citizenship requirements to the federal form. But the justices, in their 7-2 vote, said Arizona is free to ask the Election Assistance Commission to add that requirement.

Only thing is, there are no active members. And Alice Miller, the panel's executive director, said she lacked the power to do that herself.

So Horne joined with Kansas, which has a similar citizenship proof requirement, to sue the commission to force Miller to agree to change the federal form. That case is still pending.

In the meantime, Horne said Arizona is bound by the Supreme Court ruling -- but only as it affects federal elections.

"They have no jurisdiction as far as state elections,' he said of Congress. Horne said the only time the federal government -- or federal courts -- can step in is if there is some violation of the 14th Amendment to the U.S. Constitution which guarantees equal rights to all citizens.

None of the attorneys who were involved in suing Arizona over the 2004 law returned phone calls seeking comment on Horne's opinion and whether they will challenge Bennett's action.

But Sam Wercinski, executive director of the Arizona Advocacy Network, said he will be watching to see how Bennett implements it before deciding whether to pursue legal action.

Wercinski also said he sees political motives behind what both Horne and Bennett are doing, saying both are facing GOP primaries next year, Bennett in his bid for governor and Horne hoping for another term as attorney general.

"After losing before the U.S. Supreme Court ... they needed something to go back to their partisan base,' he said.

One area of election law the change is unlikely to affect involves who can circulate petitions for candidates and ballot measures.

Bennett pointed out that circulators need not be registered to vote.

The only requirement is that they be "eligible to register to vote.' And Bennett said someone who has registered using the federal form, without proof of citizenship, may be equally eligible to vote in state elections as someone who is not registered to vote at all.