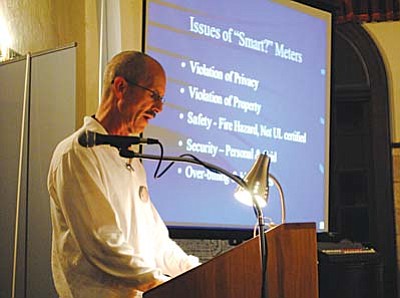 The Clarkdale Town Council heard a presentation Tuesday night from Sedona Smart Meter Awareness, a group that advocates against the widespread deployment of smart meters and their possible negative health effects in communities.

In preparation for a larger-than-average crowd, Clarkdale held the meeting in a larger space with about a dozen rows of chairs. About 30 members of the community attended the council meeting, more than half of them speaking out against smart meters and the fees APS plans to charge customers who opt out.

Mayor Doug Von Gausig said the town of Clarkdale really has nothing to say about APS issues regulated by the Arizona Corporation Commission.

"In Clarkdale, we don't have a utility, so we rely on APS," Von Gausig said. "They are solely regulated by the ACC -- the ACC is currently considering how it wants to talk about and regulate smart meters, and the way they are administered in the state of Arizona."

APS has installed about 1.1 million smart meters in Arizona since 2005, but have yet to reach the Verde Valley. They have replaced analog meters that require readers to travel from home to home, collecting data on each home's energy use to generate a monthly bill.

In contrast, smart meters contain a 900-MHz radio that transmits usage data to APS throughout the day. These radios meet FCC guidelines for safety, and several studies show they emit radio frequencies no stronger than a baby monitor and several times weaker than a cell phone.

Councilman Reynold Radoccia, a solar user who lives off the power grid, invited SSMA to speak at the council meeting.

SSMA was part of the push that resulted in the Sedona council sending a letter this summer to the FCC citing concerns over health effects and the high opt-out fees APS wants to charge. Clarkdale resident Patrice Rohmer is one of a few members who formed a similar group, known unofficially as Clarkdale Smart Meter Awareness.

"We became activists because nobody knows about smart meters and we want people to have the option of refusing," Rohmer said.

APS Director of Customer Operations Michael Goguen said studies that show smart readers are dangerous are often conducted in open spaces, where any number of wirelessly transmitting devices can interfere and make readings seem higher than they are.

"We built a room that doesn't let in any type of (radio frequency) so that we could test these meters," Goguen said. "Out in the environment, you don't know when you're testing where the RF is coming from."

He said these emissions are hazardous to residents, causing a range of maladies from headaches to cancer. The amount of information APS collects from each customer was also a cause for concern. Woodward said through smart meters, the utility company can create a detailed picture of everything a customer does using energy, creating a privacy issue.

Woodward himself spent time collecting emission levels from smart meters in areas like Prescott and Phoenix where they have been deployed. He said the levels were comparable to, if not higher than, those emitted by a cell tower.

He read accounts from people who experienced the negative effects of smart meters.

"On the other side of the coin, there are no studies that conclude smart meters are safe," he said to the council.

The meeting was punctuated by gasps, scoffs and shouts from some of the audience, especially when members of the council questioned Woodward's facts or reigned in public comments that went over their time limit.

Clarkdale residents gave accounts of how wireless transmissions impacted their lives, some pointing to the headaches they'd gotten just by sitting in the council meeting surrounded by microphones and wires.

One woman told the council she was concerned for her 4-year-old daughter, whose bed would sit just a few feet from a smart meter on the other side of the wall.

Many said there was no added benefit to customers from having smart meters installed, and that this was simply a cost-cutting measure by APS that would generate millions in opt-out fees.

The ACC is considering a proposal from APS that would require individuals who choose to opt out to pay a $75 fee up front, and an additional $30 for each month after that. The regulatory body requested an independent study be conducted by the Arizona Department of Health Services to test the effects of smart meters. This is expected to take about a year.

APS asserts these opt-out fees are in line with the actual cost of meter readers, vehicles and fuel that would be needed to read the analog meters currently being requested by about half a percent of their customers.

SSMA claims the only way to truly protect a community is to have everyone as a whole opt out, and these fees are akin to "extortion." People should be able to self report, possibly by taking a picture of the meter reading and emailing it to APS.

Goguen said smart meters allow a number of alternative rate programs for customers, like prepaid energy in order to avoid a large deposit to start service. Through smart meters, residents can also pick a due date so that they can pay their bill on a day they choose.

This also allows APS to see when a transformer may be about to fail so that the utility can send someone out to replace it and avoid an outage.

APS expects the rest of its smart meters to be installed by April 2014.

At the end of the public comments, Councilman Bill Regner said he has challenged APS on issues like net metering for solar customers, and that he will send a letter to the ACC expressing his concerns as an independent citizen.

Woodward interjected here, shouting from his seat in the audience, "Yes, you can," at which point other members of the audience chimed in.

Regner said that was part of the problem.

Radoccia said the opt-out fees are unrealistic and a burden on the people. There isn't enough information out there about the effects of smart meters, and alternatives that make financial and health sense should be considered.

"This is something that we need to address as a community, and I would like to see it addressed on a future council agenda," Radoccia said. "I respect Sedona's opinion on this."

Councilman Richard Dehnert said nobody in council or at the meeting has the scientific knowledge to decide which set of research is right and which is wrong.

"It worries me that people are afraid of their worlds to the extent that we've heard tonight," he said. "The town council will no doubt have it on our agenda."

He also pointed out that Clarkdale is a sustainable community, and the council could have easily gone online to access the 200 pages of one-sided, printed information SSMA provided to each member. Dehnert asked for consistency in the future.

Councilman Curtiss Bohall said he spent 20 years in the Navy surrounded by all kinds of equipment, and at 80 he is still healthy.

"Why didn't it nail me to the wall?" he said, at which point a member of the audience shouted ... "genetics."