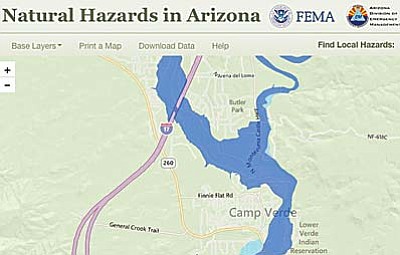 The hazard map can show the potential for flooding in Camp Verde neighborhoods.

PHOENIX - A person looking to buy a house in Gila Bend area can see if the neighborhood lies in a potential flood zone.

Someone visiting the Grand Canyon will learn that it's in a zone prone to earthquakes.

A homeowner in the Tucson area may be surprised to discover that her foothills house lies in an area considered at risk for wildfires.

A new interactive hazard map developed by the Arizona Geological Survey and the Arizona Division of Emergency Management enables visitors to explore areas with active faults, past earthquakes and earth fissures, as well as zones considered at risk for floods and wildfire.

"You have to be informed about the hazards in your area," said Judy Kioski, spokeswoman for the Arizona Division of Emergency Management. "This makes it so easy. It's right at your fingertips."

Kioski said flooding is the No. 1 disaster in Arizona, with houses close to the Salt, Gila and Colorado rivers at highest risk.

"A lot of times people will build in areas that they shouldn't," she said. "What's nice about the natural hazard viewer website is you can actually pinpoint areas that are prone to flooding."

The site allows people to find out which natural disasters have occurred within three miles of any location by typing in the address. Then they can view tips on how to prepare and protect themselves.

Unlike alerts that are fed to cell phones from the National Weather Service, the hazard viewer doesn't carry real-time information.

"This is going to give you some history of what has happened and what is likely to occur," Kioski said.

Michael Conway, chief of the Arizona Geological Survey's Geologic Extension Service, said the viewer was initially created for first responders but is being made available to help residents be prepared.

"It can empower people," he said.

Conway said he'd like to see the site offer information on more hazards, such as landslide risk, but he said there aren't resources to do that at present.

Natasha Holstein, community preparedness and resilience manager for the Grand Canyon Chapter of the American Red Cross, said people should be aware of natural hazards, especially traveling to new areas of the state, so they can plan accordingly. Parts of Arizona are at risk for earthquakes, she noted, and the Red Cross offers mobile apps with real-time information on those along with information on wildfires and first aid.

"If you don't know anything about preparing for an earthquake and you're going into an earthquake zone it's nice to pull up the natural hazard viewer," she said.