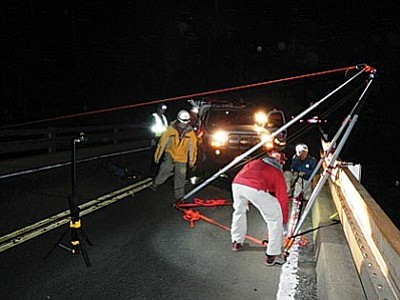 Coconino County Sheriff's deputies and detectives are investigating the death of a 27-year-old man from the Cottonwood area who fell a distance of more than 200 feet from Midgley Bridge as a possible suicide.

On Wednesday, Oct. 10, at about 7:33 p.m. Sedona 911 operators received the report of a vehicle that was stopped on Midgley Bridge with the driver's door open. Sedona Police officers and Coconino County Sheriff's deputies responded. Upon their arrival responding deputies found the vehicle to be unoccupied with the passenger side at an angle to the guardrail.

Deputies found a bedroom slipper in close proximity to the guardrail. Due to the dark conditions and the distance to the canyon floor, rescuers could not look down from the bridge to determine the presence of a victim.

A CCSO deputy and a Search-and-Rescue volunteer hiked to the bottom of the canyon and located the body of an adult male who was deceased. They placed the body in a carrier, and six Search-and-Rescue Unit members who were on top of the bridge hoisted the body up. The body was released to a representative of the Coconino County Medical Examiner's Office and was transported to Flagstaff.

Coconino County Sheriff's Detectives are continuing this investigation. The name of the deceased individual is being withheld pending notification of next of kin.