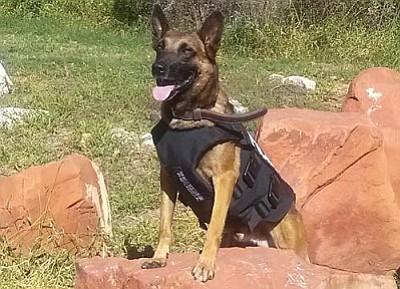 The Cottonwood Police Department's Police K-9 Jax is the recipient of a bullet and stab protective vest.

Jax recently received a bullet and stab protective vest thanks to the efforts of Vested Interest in K9s, Inc, a Massachusetts-based nonprofit organization.

The made to order vest was recently delivered and will protect the K9 Jax from bullet and stab wounds as well as blunt force trauma.

Vested Interest in K9s, Inc. is a 501c (3) all volunteer charity located in East Taunton, MA whose mission is to provide bullet and stab protective vests for law enforcement dogs throughout the United States. Each vest costs $950 and has a 5-year warranty. The nonprofit was established in 2009 to assist law enforcement agencies with this potentially life-saving body armor for their four legged K9 Officers.

Through private and corporate sponsorships, Vested Interest in K9s, Inc. has provided over 435 law enforcement dogs with protective vests since their inception in August of 2009. Over $400,000 in K9 vests have been donated in 35 states including Alaska and Hawaii.

Two recent events made it possible for the charity to provide 217 vests for our canine crime fighters across the country. January 2013, a regional Groupon Grassroots campaign naming Vested Interest in K9s as a charity partner raised over $55,000 which allowed the donation of 53 K9 vests and a nationwide Groupon campaign in March 2013 raised over $155,000 providing vests for 163 K9s in 30 states.

The organization orders the Armor Express vests made in Central Lakes, MI exclusively from distributor Regency Police Supply in Hyannis, MA who also does the custom embroidery on the body armor.

New K9 graduates as well as K9's with expired vests are eligible to apply for the ballistic vests.