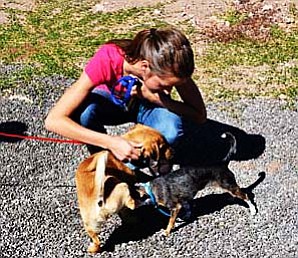 Running in the club's second college-level meet, the runners of Aftershock Distance Club continued to surge toward the beginning of the championship season, which starts Nov. 3.

"These races are great for us," said head coach Micah Swenson. "With a race field like this, there's a depth of competitiveness that's hard to find other places."

For almost all of the members of Aftershock, this was the second race against college runners, and they all continued to impress. Freshman Chris D'Angelo was thrown into the frying pan, but handled his first race against college-level runners with flying colors.

"It was fun to throw Chris into the fire and see how he would respond," Swenson said.

D'Angelo, the youngest runner in his field by four years, fell to the middle of the pack early in the race, but kept it together and began to move up on the pack over the final 1.5 miles. The freshman ran an 8,000-meter race, instead of the usual 5,000-meter, and despite the extra distance, kept almost the same pace.

According to Swenson, D'Angelo added only 4.8 seconds onto his mile pace (5:29.1) despite running 3,000 more meters, and finished the race in 27:15.6, which put him in 41st. While that low of a finish is not normal for D'Angelo, he did finish ahead of 33 community college runners and was only four seconds behind the University of Arizona's freshman Michael Cox, who finished 10th in the Division-I race.

"It was pretty nerve-racking at first, but once the gun went off, basically, I was just racing," D'Angelo said. "I raced a lot better than I actually thought I would. We were planning for about a 5:40 mile and I ended up going 11 seconds faster per mile, so that worked out well."

An interesting thing about the men's race was that D'Angelo ran against former Camp Verde sprinter and state place winner Justin Reay, who now runs for Arizona Christian University. D'Angelo finished 2:20.5 ahead of the former Cowboy.

"This race gives us a great gauge to see what needs to happen over the next 3.5 years, to get him ready for collegiate racing," Swenson said. "This also helps him in the recruiting circles. Now, just like the girls, his name is out there and some college coaches can put his name and face together."

D'Angelo's female counterparts made improvements in the short time between races, and four of them improved their times.

All of the girls' finished ahead of their college opponents, and all of the members of Aftershock beat out at least one Division-I level runner.

After Allyson, sophomore Penny Fenn had one of her better races, finishing No. 18 overall and No. 15 in scoring with a time of 19:22.4. Fellow sophomore Megan Goettl rounded out the top-3 for Aftershock with her No. 33 finish at the Thunderbird Invitational. Goettl finished the race in 19:53.7 with a mile pace of 6:24.2.

"I've been working really hard to try to achieve my goals and the race with the high level, all the college girls, I think helped also because they were fast and it made me go fast too," Alexander said.

Alexander finished her previous race just shy of breaking the 7-minute mile pace mark, but at Mesa Community College, she was able to get well below that mark by finishing with a 6:45.7 pace.

"I'm kind of honored because I'm only 13 and I'm beating college girls, some of them ... it's just so cool to think that I'm already up there with them," Alexander said.

As a team, Aftershock was missing one runner, but still managed to finish No. 5 with 110 points and an average time of 19:34.72, 51.32 seconds behind CACC's average time, but only 18.10 seconds behind second place Arizona Christian University. It is also worth noting that with seven runners at the Desert Twilight, Aftershock ran an average time of 19:16.1. At the Thunderbird Classic, four girls improved their times, meaning that with a full seven runners, the girls could have, arguably, fought for second place (no one was going to catch CACC. The school finished with 34 points.)

"The quiet highlight of the day for me was Sydney Alexander," Swenson said. "At Twilight, she just missed breaking the 7-minute mile pace barrier (and) she came into this race motivated to make it happen. For her to run 21 minutes flat for 5K, a 6:45 pace, is a huge step forward. It's a testament to her consistency in practice and the new mental maturity she has in her racing."

Now the club rests up and focuses on training with no races until Nov. 3. That is when Aftershock will kick off its championship season with the USA Track & Field Road Racing State Championships.

"An eight-day turnaround isn't a lot, especially with the training we are doing at this point in the season," Swenson said. "For Penny, Karen, Swayze, and Sydney to all make time improvements and run season best times showed great mental toughness on their part."