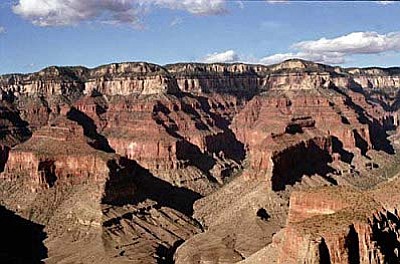 The cash infusion comes on top of the $651,000 the state sent to the National Park Service last Friday. That payment allowed the gates to reopen after an 11-day closure following the shutdown of the federal government at the beginning of the month.

That first payment is enough to keep the park operating through Friday.

But the deal Brewer inked with Jonathan Jarvis, the park service director, requires the state to have at least two days' worth of funding on account at any time. That is based on Jarvis' contention it takes that many days to shutter the park.

That forced Brewer to come up with some more dollars Wednesday, even as there were signs of a deal in Washington to both fund the government as well as avoid hitting the debt ceiling and defaulting on the nation's obligations.

While Brewer could have opted to extend park operations by only two days, though this weekend, she chose instead to send an extra $837,000.

That includes some leftover funds from the original payment, where Brewer had allocated $500,000 from the Arizona Office of Tourism and had a check for $200,000 from the town of Tusayan. The balance will be fueled by another $226,500 in private donations from Tusayan merchants plus more out of state tourism promotion funds.

The deal with the Park Service says these funds are a "donation,' with no promise of reimbursement once the federal agency is again funded from Washington. But Brewer said she is counting on members of the state's congressional delegation to approve legislation reimbursing Arizona as well as other states like Utah and New York which have fronted local funds to reopen closed national parks.

Rep. Paul Gosar, R-Ariz., already has introduced such a measure.

As to paying ahead, there is no real risk. The Park Service contract requires it to refund any unused state funds if the Grand Canyon gets reopened with federal dollars.

Brewer defended using all the dollars available to her solely to reopen the Grand Canyon even though there are close to two dozen other national parks and monuments closed off to visitors. She called it one of her "tough, tough decisions.'

"Certainly the Grand Canyon is the diamond in the crown of Arizona,' the governor said.

"We know that people visit there in great crowds,' Brewer continued. "And the revenue that's generated out of there is huge.'

Numbers released by the governor's office back that up. In a press release, Brewer' office said tourists to all the national parks in Arizona spend $2.5 million a day, with nearly half of that at the Grand Canyon alone.

Brewer said she has no specific plans for what to do if the deal being brokered in Washington for the budget falls apart.

"We'll be counting our dollars and see where we go from there,' she said.