Judge: Counties cannot use zoning to ban legal marijuana dispensaries
'A county may not use its zoning powers to violate state law' 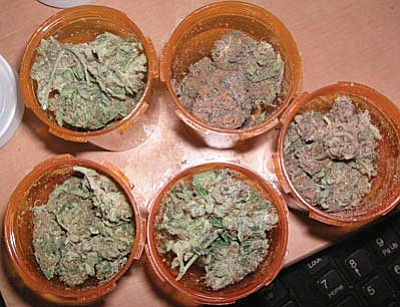 PHOENIX -- Counties cannot do an end-run around the Medical Marijuana Act by changing their zoning laws to make it impossible to open a dispensary, a judge ruled Monday.

Maricopa County Superior Court Judge Michael Gordon said it's one thing for counties to use their local powers to prohibit illegal activities. And he said that's the way the county's ordinance read -- until August.

But Gordon said the new version is worded in a way that it "categorically prohibits medical marijuana dispensaries." The judge called that little more than "a transparent attempt to prevent implementation of the Arizona Medical Marijuana Act" in the areas where the Board of Supervisors controls the zoning.

"A county, however, may not use its zoning powers to violate state law," he ruled. And that, he said, is exactly what has occurred here.

Gordon's ruling legally affects only what is happening in Maricopa County. But the legal arguments he cites in voiding the county ordinance would apply equally to efforts by another other county -- or city or town -- to try to zone out dispensaries.

This is actually the second defeat for Maricopa County Attorney Bill Montgomery on the issue and his attempt to argue that the county can do nothing that allows people to violate federal laws that still make possession and sale of marijuana a crime.

Last year the same judge ruled that the 2010 law is not preempted by federal law. Gordon pointed out that more than a third of the states already have laws permitting some form of legal marijuana use.

"This court will not rule that Arizona, having sided with the ever-growing minority of states and having limited it to medical use, has violated public policy,' Gordon wrote.

Montgomery has appealed that ruling. And the state Court of Appeals is set to hear arguments next month.

But in the meantime, the board of supervisors -- under Montgomery's legal advice -- recrafted its zoning laws to essentially make no unincorporated area of the county available for a dispensary.

Gordon said state law broadly empowers counties to adopt "reasonable regulations addressing the public's safety, health and welfare.' But he said the law approved by voters in 2010 expressly limited that power to allowing dispensaries only in certain specified areas.

"A county zoning ordinances that poses a categorical prohibition of medical marijuana violates state law that limits its zoning jurisdiction,' the judge wrote.

The dispensaries are a key part of the 2010 law which allows those with a doctor's recommendation and state-issued ID card to obtain up to 2 1/2 ounces of marijuana every two weeks. At last count there were close to 42,000 cardholders.

While cardholders were initially allowed to grow their own drugs, the law says they must obtain their supply from a state-regulated dispensary once there is one within 25 miles.