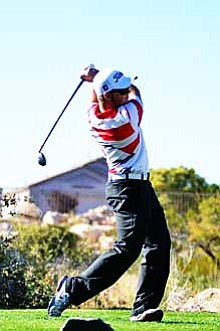 At the beginning of the season, the Mingus Union golf team had a team goal of making it to the state tournament as a team.

During the season, there were many chances for the Marauders to qualify, but just fell short. With two chances remaining, the pressure was on but everyone was ready. Unfortunately, the Marauders fell 2-strokes shy of qualifying as a team.

"We came so close ... we had a couple of opportunities that we just missed," said head coach Craig Mai. "It's disappointing but it's nobodies individual fault, it was a team effort and I didn't do my part as well either there. We came up just short of our team goal of making it to state."

On the bright side, both seniors Gary Baker and Ryan Sullivan will be traveling to Aguila Golf Course. Baker notched his final qualifier a week ago, but it was Sullivan who had to rise to the occasion with a dual and a tournament left. The senior was able to handle the pressure, tallying his two final qualifiers and shooting one of his better rounds of golf.

Mingus Union ended the season at home with the John Uidenich Memorial Invitational. Technically, Sullivan left the winner. Both him and Baker shot a 69 (their best scores at Verde Santa Fe) but instead of playing a playoff to determine the winner, they went to the scorecards to see who had the better back-9.

"The best I've played in a long time," Baker said. "Today I shot 69, 2-under par, which is the best I've ever shot in my life. I feel really good about the way I played."

It was Sullivan who performed better on then final nine, but the two Marauders were named co-medalists.

"That's the best score I've ever had by about five or six strokes," Sullivan said. "On the front-9, I was just on. I could have made four more putts and shot a 31, then they started to drop a little bit for me on the back. I had two putt birdies, which was the big key. I was on both the par-5's in two. I didn't get myself in trouble, except for eight, I made a bogey on that and walked onto the next one, got a par there, so it saved my even o the front. Then I cam to the back and was hitting it solid all day long and putts were just good enough to get me pars."

While Sullivan may have had the more impressive back-9, it was Baker that picked up a clutch put on the 18th hole. After hitting the ball into a hazard and having a drop that he did not wholly agree with, the senior was able to get to the green and sink a long put for par.

"It felt great," Baker said. "I was worried, I was kind of confused and a little upset about how I had to play that shot with the drop out of the hazard, its kind of a weird situation when you have to drop in the hazard again, but after that, being able to get up and make my putt for par felt great."

Overall, the Marauders finished second. Flagstaff took top honors, but Mai was proud of how his team bounced back from a disappointing dual the day prior.

"Knowing that it was over, no chance at state (as a team), we came back, played great, ended up second place ... I'm very proud of the way they came back and played well," Mai said.

Now Sullivan and Baker will prepare for the state meet. The final golf tournament of their high school careers will be held at Aguila Golf Course on Oct. 25-26.