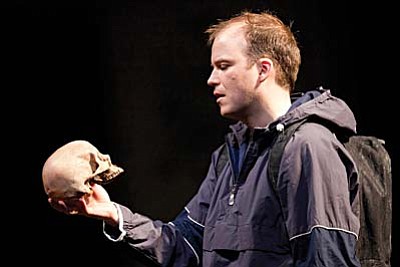 The National Theatre of London returns to Sedona on Monday, Oct. 28 when the Sedona International Film Festival hosts the encore premiere of “Hamlet”. Rory Kinnear plays Hamlet in a dynamic new production of Shakespeare’s complex and profound play about the human condition, directed by Nicholas Hytner.

The National Theatre of London celebrates its 50th Anniversary with the encore presentation of "Hamlet", starring Rory Kinnear, on Monday, Oct. 28. The Sedona International Film Festival hosts the big screen premiere of William Shakespeare's celebrated play. There will be one show at 4 p.m. at the festival's Mary D. Fisher Theatre.

Following his celebrated performances at the National Theatre in The Last of the Haussmans, Burnt by the Sun, The Revenger's Tragedy, Philistines and The Man of Mode, Rory Kinnear plays Hamlet in a dynamic new production of Shakespeare's complex and profound play about the human condition, directed by Nicholas Hytner.

The National Theatre opened its doors at its original home in the Old Vic, close to its current South Bank premises, on Oct. 22, 1963 with a production of Hamlet directed by Laurence Olivier and featuring Peter O'Toole in the title role - hence the timing of this encore screening.

The production garnered four- and five-star reviews from every major publication in London:

"Tremendous. Rory Kinnear's performance is superb in its resonance and intelligence. This is a Hamlet for now." - The Times

"Rory Kinnear excels. An evening to admire and cherish." - Guardian

"A chilling production that demands to be seen." - Independent

"A constantly compelling, fresh-minted production with many insights and original twists... Rory Kinnear proves a Hamlet of great individuality and distinction." - Daily Telegraph