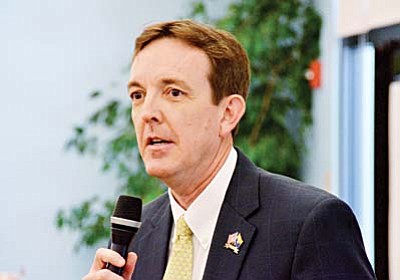 Secretary of State Ken Bennett wants a court to order the federal Election Assistance Commission to modify its voter registration forms to demand proof of citizenship.

PHOENIX -- Not willing to maintain a dual registration system, Secretary of State Ken Bennett wants a court to order the federal Election Assistance Commission to modify its voter registration forms to demand proof of citizenship.

In legal filings Wednesday, Bennett said he needs an immediate order to ensure that Arizona -- and Kansas, which is seeking the same relief -- are not denied "their sovereign and constitutional right to establish and enforce voter qualifications.' Without the order, Bennett said the state will forced to register unqualified voters.

The U.S. Supreme Court in June ruled that Arizona is required to accept the federally designed form even though it does not require the proof of citizenship that voters mandated in 2004. The justices, in a 7-2 ruling, said Congress was legally entitled to impose that mandate when it comes to federal elections.

But Bennett concluded earlier this month there is a legal work-around: a dual voter registration system, one for those who can prove citizenship and can vote on all races, and a second for those without such proof who could vote only in federal contests. And he ordered counties to put that into place just weeks ago.

Now, however, Bennett contends that will be "unduly burdensome.' So he wants a federal judge in Kansas who is hearing the case to order the Election Assistance Commission to add a proof-of-citizenship requirement for the voter-registration forms it has for Arizona.

And Bennett and Kris Kobach, his Kansas counterpart, want that to happen soon, seeking a hearing on Nov. 12 or shortly thereafter.

The court filing is Arizona's latest attempt to enforce that 2004 initiative which requires both proof of citizenship to register to vote and showing identification at the polls. Accepted documents include a birth certificate, passport or Arizona driver's license issued after 1996 when the state began demanding proof of legal presence in this country.

That form has no citizenship-proof requirement, instead requiring only that those seeking to register swear, under penalty of perjury, that they are citizens.

In their June ruling, though, the justices said Arizona remains free to ask the commission to alter its forms for Arizona.

But that request went nowhere because the commission has no active members. And Alice Miller, the panel's executive director, said she lacked the power to do that herself.

So now Arizona and Kansas, which has a similar proof-of-citizenship requirement, want a federal judge to order Miller to make the change, commission or not.

Attorneys for both states contend Miller and the vacant commission "are under a nondiscretionary duty to make the proposed modifications' to the federal form.

"Defendants' refusal to make such proposed modifications constitutes an infringement on the sovereignty of the plaintiff states and infringes on plaintiffs' constitutional power and right to establish voter qualifications,' the lawyers wrote.

Arizona Attorney General Tom Horne said while Congress does have certain absolute power over federal elections, like the age qualifications for senators, he believes the U.S. Constitution still gives states the power to decide who can vote.