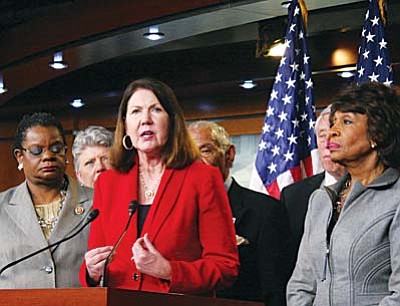 Rep. Ann Kirkpatrick, D-Flagstaff, represented the sprawling 1st District once before, but lost a previous re-election bid. Elected back to the seat in 2012, she already has several GOP challengers for the 2014 campaign. (Cronkite News Service photo by Michelle Peirano)

WASHINGTON - With a year until the next election, Democratic freshmen in three competitive Arizona congressional districts are continuing to stockpile cash for their re-election bids, according to the latest campaign finance reports.

The Federal Election Commission said Reps. Kyrsten Sinema, Ron Barber and Ann Kirkpatrick had each raised at least $280,000 between July 1 and Sept. 30. No other member of the state's congressional delegation raised even half that amount during the period.

Only Rep. Ed Pastor, D-Phoenix, had more campaign cash on hand, reporting $1.3 million in the bank as of Sept. 30.

"Having cash in hand is always a good thing," said Barbara Norrander, a professor from the University of Arizona's School of Government and Public Policy.

Sinema's, Kirkpatrick's and Barber's districts have been targeted by the national Republican Party, and all three have been described as "seats in play" by the Rothenberg Political Report.

All three already have legitimate challengers. Barber, in particular, was outraised in the quarter by Republican Martha McSally, who is seeking a rematch for the Tucson-based seat after narrowly losing to Barber in 2012. McSally reported raising $349,164 in the third quarter, more than any other challenger or any incumbent in the delegation.

"It means McSally is a credible challenger," Norrander said of the fundraising. "She is facing an uphill battle and she has to raise more than the incumbent."

But while McSally raised more, Barber still had almost twice as much cash on hand at the end of the quarter, the FEC said.

"Rep. Barber has been having three strong quarters in a row, but it is only McSally's first quarter, and candidates always raise more money in the first quarter," said DJ Quinlan, executive director of the Arizona Democratic Party.

But Arizona Republican Party spokesman Tim Sifert said the party has confidence in the "great and competitive candidates" it is already fielding for 2014.

"Arizona is a very Republican state," Sifert said. "The Republican party has bigger advantage in voter registration and voter turnout."

He pointed to the multiple Republican challengers in the districts. They include relatively recent candidates like radio talk-show host Ed Martin, who is running against Barber, and Arizona House Speaker Andy Tobin, who hopes to challenge Kirkpatrick.

Because both challengers only recently declared their campaigns, neither has fundraising that shows up yet with the FEC.

Democrats expect Tobin to raise a lot of money, Quinlan said, as he "is someone a lot of people want to be friend of in Washington, D.C., and with a lot of special interest," said Quinlan.

Sinema also faces several Republican challengers for her Phoenix-area seat. They include Wendy Rogers - who raised just under $120,000 in the last quarter and had $272,828 on hand - former NFL player Andrew Walter and 2012 GOP nominee Vernon Parker.

With so many Republican challengers, Quinlan sees an advantage for the Democrats.

"The three districts are moderate swing districts," said Quinlan, who said challengers might go too far right in the primary to win in the general election.

And Jones said a harshly contested Republican primary could make it more difficult for the nominee to win the general election.

"It would be more costly to have a stronger primary election competition than to have a nominal one," said Jones, who said challengers "need save enough money to go up against the Democrats."

But Sifert said he is confident the party can unite behind its nominees after the primary and win in the general.

"The only way that I can prove that point is going to be the day after the election," he said.

The first number below is the amount of money raised in the third quarter by Arizona congressional candidates; the second is cash on hand as of Sept. 30, according to the Federal Election Commission.