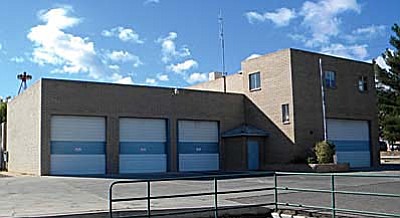 COTTONWOOD -- The pace is accelerating in an effort to provide a teen center for the Verde Valley.

The organization has been given a verbal OK by the City of Cottonwood to use the former Mingus Avenue Firehouse. A lease agreement is still pending and the organization must, first, bring the space up to Americans with Disabilities Act standards.

Marianne Jiménez, Cottonwood's city clerk, is leading the organization that has dubbed itself the Verde Valley Youth Commission, though it is not a direct function of the City.

Jiménez says the organization of mainly adults is asking the city for a dollar per year long-term lease on the building like the lease that allows the Boys and Girls Club in a city-owned building at the Old Town Activity Park, that once housed the American Legion.

The Moose Lodge and two of its leaders, Allan and Cheri Marx, have been very active in supporting the Teen Center concept and have hosted a dance and fall festival to support teens.

The organization is mainly adults so far. The Fall Festival was well attended and successful, says Cheri Marx, though the dance turnout was light. They also manned a Farmer's Market booth all summer long and sold cupcakes and popcorn, water and tea to raise money.

"We want kids involved, especially when there are decisions to be made, so those decisions can dovetail with their interests in how to set it up," she said.

The Moose Lodge also has a nonprofit status that the organization can use for fund-raising, making donations tax deductible.

Contractor Bob Backus has developed plans for the update of the fire station space, which Cheri says is conveniently located opposite the Cottonwood Middle School, near the library and recreation center, the park and its basketball court.

"We have to come up with the money to do repairs and get it up to ADA standards," she says.

He estimates it will probably take $5,000 to $6,000 in money or materials to do the work with skilled volunteer help.

Office space and bays formerly used for fire equipment, and later, for the ambulances of the Verde Valley Ambulance Company, would be available for the Teen Center operation. One large separate bay on the south end holds equipment of the Verde Valley Swat Team and the second floor dormitory area is not considered safe for use at this time. Jiménez hopes that the kitchen on the second floor can eventually be used for cooking bake sale type items.

Jiménez says the 1,100-square feet space would accommodate a craft room, a video game room and a quiet room for homework and such. They also anticipate open space would be used for a foosball table and a pool table, a big screen TV and air hockey.

The facility also has a small kitchen area on the ground floor that can be used for vending snacks. The VFW has already donated a popcorn machine.

Backus has finished plans that now need the review of the Cottonwood Planning Department. He expects that volunteers will be able to start the work by January.

The effort also needs to recruit manpower to help with the upgrades and fundraising to get the needed materials, if they are not donated. People may contact Jiménez in the Clerk's office at 340-2727 and Cheri Marx at the Moose Lodge at 634-8668

The operation already has a bank account open at the Arizona State Credit Union, at Willard and SR 89A under "Verde Valley Youth Commission."