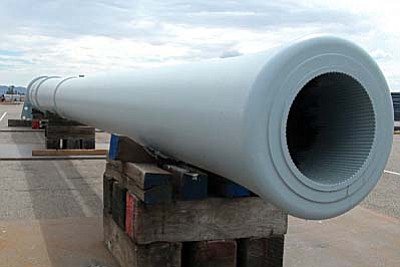 This gun barrel from the USS Arizona is ready to be moved to Wesley Bolin Memorial Plaza in October as organizers ready the state’s World War II memorial for a Dec. 7 dedication. (Cronkite News Service Photo by Andrew Knochel)

PHOENIX - Behind a construction fence outside the State Capitol, Arizona Secretary of State Ken Bennett points out the concrete pedestal on which a 70-ton gun barrel from the USS Arizona will rest.

Bennett said everything is on track, from fundraising to donations of time and material, to dedicate a World War II memorial featuring guns from the Arizona and USS Missouri on Dec. 7.

"All kinds of companies have donated rebar, concrete, and workers from a lot of the unions," he said. "We've had a real wonderful outpouring of companies wanting to help in a variety of different ways - somebody's gonna do all the landscaping for free, somebody's gonna put in the lights."

Bennett was the driving force behind a nearly three-year effort to obtain the two guns and bring them here from East Coast shipyards.

No tax dollars have been spent directly in the process of building the memorial, he said.

The gun barrels have been sandblasted and repainted and now wait for concrete to cure before being moved from a storage lot near downtown to their permanent home in Wesley Bolin Memorial Plaza on Oct. 7.

The memorial will feature the gun barrels pointing toward downtown along West Washington Street, with nine steel beams standing upright between them, bearing names of the more than 2,000 Arizonans who died in World War II.

"As we looked at the schematics of Wesley Bolin Memorial Plaza, we realized there is a memorial to every U.S. war except World War II," Bennett said.

Bennett said the memorial fund will continue to raise money to cover unanticipated expenses and the ongoing costs of the memorial. The fund will allow individuals to sponsor paving bricks, and families of World War II service members can purchase plaques dedicated to Arizonans who served in World War II.

In 2011, when Bennett began raising money for the memorial, he approached Phoenix Rotary 100. Board member Karny Stefan said that since Bennett's presentation her group has helped raise more than $80,000 in cash and in-kind contributions.

"Everyone jumped at the opportunity to help," Stefan said. "With the USS Arizona being the first ship to go down, it's really something that Arizona didn't have a memorial for those who died in World War II."

Dave Hampton, public information officer and legislative liaison for the Arizona Department of Veterans Services, said his department gave the memorial $200,000 from the Veterans' Donations Fund, coming from private contributions and the sale of special license plates.

Hampton said that organizers are still finalizing plans for the dedication on Dec. 7.

David Lucier, president and CEO of the Arizona Veterans and Military Leadership Alliance, said that the memorial will be valuable for veterans of all conflicts, not just those who served in World War II.

"Anytime a state will honor veterans, it's just a good thing," Lucier said. "This is hugely meaningful for all veterans."