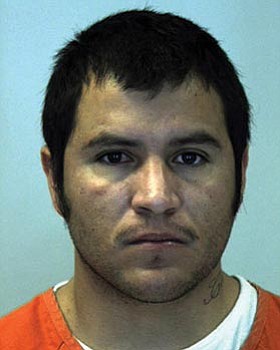 PRESCOTT -- One of the two attorneys representing Village of Oak Creek man Cesar Garcia-Soto in his death-penalty murder case has been allowed to withdraw for medical reasons, according to court documents.

Garcia-Soto, 31, was arrested in February 2008 on charges of first-degree murder and two counts of child abuse in his 3-month-old son's death. He faces the death penalty if convicted.

Three weeks before his arrest, on Jan. 23, 2008, Yavapai sheriff's deputies were dispatched to an apartment on Sugarloaf in the Village of Oak Creek at the request of Sedona Fire District. Emergency crews had found 3-month-old Edwin Alejandro Garcia unconscious and not breathing.

The child was flown to St Joseph's Hospital in Phoenix where he later died. The baby's father, Cesar Soto Garcia, 26 at the time, was the only adult who was with the baby when it stopped breathing.

The baby's mother, Gladis Yamileth Rodriguez Paz, was at work when the 911 call was made.

The hospital reported that the baby had a broken arm and several broken ribs that appeared to be from earlier injuries and were described by the hospital as "highly suspicious."

Cesar Garcia-Soto was placed under arrest for providing false information and for having two felony warrants issued by Maricopa County for assault and kidnapping.

Child Protective Services was called and the couple's two other children were taken by CPS that night.

Along with the earlier injuries, it was found the baby also had a fractured skull and associated brain trauma and a fractured pelvis.

According to CPS, the other two children also show signs of "chronic neglect."

Phoenix lawyer Dennis Jones, the second-chair attorney in the case, filed a motion last month indicating that he had developed a vision problem "that limits (his) ability to effectively represent Mr. Garcia-Soto" and that he would not be accepting new clients.

Superior Court Judge CelÃ© Hancock granted the request and the public defender's office will assign a new attorney to the case.

Jones and John Napper have attempted to be released from the case several times, saying they are obligated to undertake "an exhaustive investigation into the history and life of Mr. Garcia-Soto," but that investigation would have to take place in Mexico, and "the United States State Department has issued a warning asking all American citizens not to travel to that portion of Mexico."

Napper said he did not want to send someone else to Mexico to do the investigation because he found it "morally and ethically repugnant" to put anyone at risk.

Hancock refused to allow them to withdraw and the Arizona Court of Appeals declined to accept jurisdiction.

Napper then asked Hancock for permission to file, ex parte, or for the judge's eyes only, information on "what (Garcia-Soto) believes an adequate mitigation investigation in Mexico would reveal." Napper said that information would prove that his client is prejudiced by his attorneys' unwillingness to travel to Mexico.

The prosecution is against allowing him to file what it called a "secret" document.

In a reply, Napper said a consulate officer from the U.S. State Department told him that, while the situation in Nuevo Casa Grandes has improved, it is still dangerous.

Hancock delayed last week's scheduled court appearance, when she was slated to rule on the motion, until a replacement for Jones could be appointed and brought up to speed on the case.