Quilters to show their craft at Creator Faire 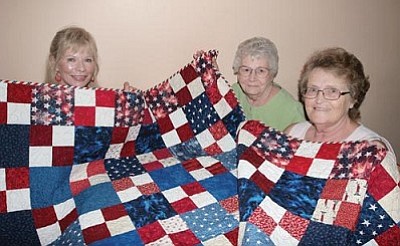 VVN/Bill Helm<br> Jeannette Teets, Peg Miller and Jeanett Salyers, from left, show one of the patriotic quilts they made that will be on display at the Fort Verde Days inaugural Creator Faire. The ladies will have a display at Creator Faire.

This inaugural Creator Faire was inspired by Maker Faire, an organization that promotes living examples of the creative process by hosting events around the world.

One of the creators at the faire will be a team of quilters from Camp Verde.

Camp Verde resident Jeannette Teets, one of the quilters, came up with the idea of doing a library fund-raiser at Fort Verde Days. The library then decided to have a Creator Faire on the odd-numbered years.

"Creator Faire is to let people know that there are local people who do creative things that they also can do," Teets says. "We will show people how to do something that they don't think is possible. Ours will be small, local, geared to the wants, needs and interests of our community. There are a lot of people who can teach you. It will be a combination creator/educator faire."

Jeanett Salyers of Camp Verde is also one of the quilters who will be at Creator Faire. Salyers says she has been quilting for just a few years. Salyers also says the Creator Faire is something that Camp Verde needs.

"Quilting can be so much fun," Salyers says. "I wish I had discovered it sooner. It's a way to create and to release some pent-up energy. It's been a really great way to meet people."

Besides displaying three quilts at Creator Faire, the ladies will show people how to put together a quilt, Teets says.

One of the quilts on display will be "The Quilter's Library," which will be auctioned off Oct. 13 during Fort Verde Days. Proceeds will be donated to the library. The other two quilts on display, Teets says, are patriotic quilts.

The library's long-range goal is to include a creator space in the new library where collaboration and innovation are encouraged to develop.

To participate in the inaugural Creator Faire, contact the Camp Verde Community Library at (928) 554-8380 or email Kathy.Hellman@campverde.az.gov. To buy raffle tickets for "The Quilter's Library,' contact Jeannette Teets at (928) 567-6891.