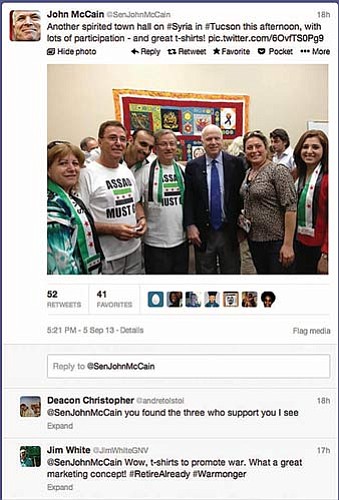 Sen. John McCain, R-Ariz., ran into stiff opposition at a "spirited" Phoenix town hall hearing this week over his vote in support of military action against Syria. But not everyone disagreed, as his Twitter photo with supporters showed. (Photo by Sen. John McCain's office)

WASHINGTON - Aerospace and defense companies, many with operations in Arizona, have seen a rise in stock prices since U.S. officials first started talking about military action against Syria last month.

Boeing, General Dynamics and Lockheed Martin all saw gains from Aug. 21, the day the Syrian government reportedly launched chemical weapons against civilians and opposition forces in the civil war there, through Friday's close.

Raytheon stock climbed to $77.93 per share on Aug. 26, the day United Nations inspectors arrived in Syria to investigate whether President Bashar al-Assad's government had used chemical weapons. After hitting what was the highest price in at least the last 15 years, Raytheon stock slipped back down, at the same time that congressional opposition to a strike has risen.

Raytheon was thrust into the news when an Obama administration official was quoted saying that any attack on Syria would likely involve Tomahawk cruise missiles - built in Arizona by Raytheon Missile Systems, a Tucson-based division of the company.

It is not clear if any of the companies' gains can be attributed directly to the news about Syria. Raytheon's stock, for example, had been on a gradual climb for the last six months after hitting a 52-week low at $52.24 in January.

But it hasn't hurt.

"Raytheon could benefit from U.S. involvement in Syria," wrote Joseph Nadol, an aerospace and defense analyst for J.P. Morgan, in his Sept. 3 report to investors. Nadol listed Raytheon second on his list of September prime defense stocks.

A spokesman for Raytheon declined to comment this week on the company's rising stock price. Other defense contractors in the state also declined comment on their stocks, although Boeing did point out in an email that the company is involved in much more than just the defense business.

On Aug. 31, President Barack Obama said he planned to take military measures against Syria to prevent future use of chemical weapons there, but said he would seek congressional approval first. That resolution is still being debated by Congress, which is on recess until next week.

Should the United States take action against Syria, administration officials have been quoted in news reports saying an attack would likely come from U.S. warships in the Mediterranean Sea that are armed with Tomahawks.

Tomahawk missiles can be launched from ship or submarine and are the same missiles the U.S. used in attacks on Libya in 2011.

The Pentagon bought 196 Tomahawk missiles from Raytheon in fiscal 2013, for $320.3 million, according to information from the Defense Department. The military also bought 196 missiles in fiscal 2012 after buying 417 in 2011, the department said.

Raytheon said in July that it reported second-quarter net sales of more than $6 billion this year, up 2.1 percent from the second quarter in the previous year. In its latest filing with the Securities and Exchange Commission, the company said, it also reported a 7 percent increase in net sales for its missile systems branch, to $1.69 billion in the second quarter.

The company said then that sales of several missiles drove the division's growth, but the Tomahawk was not one of those cited.

Former Arizona Sen. Jon Kyl said there is no getting around the fact that the defense industry is now a sizable part of the state's economy.

"At least in one case, we've got a defense contractor in Arizona that could actually benefit by a strike on Syria," Kyl said of Raytheon.

He added quickly that economics should never be considered in the decision to go to war. But an expert with the National Priorities Project said the cost of war should be considered.

Mattea Kramer is research director for the organization, which said its mission is to make federal budgets accessible and relevant to Americans.

She said taxpayers pay $36,000 an hour for the Tomahawk missile program but that there will be other costs that come with military action against Syria that cannot be predicted at this time. That is one reason not to get involved in Syria, she said.

"It would be costly," Kramer said. "No one can say how costly it will be."

Aerospace and defense company stock prices have performed well in the weeks since the U.S. started talking about the possibility of military action against Syria.