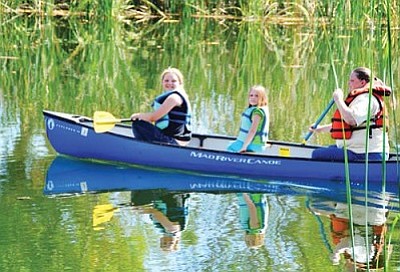 COTTONWOOD - Verde River Day, on the last weekend in September, has become emblematic of a wonderful Central Arizona fall environmental fair. There will be plenty of fun and educational activities around the lagoons at Dead Horse Ranch State Park on the banks of the Verde River Sept. 28.

There are activities for adults, for kids, for the families. There is food, fishing, sand castle-building, musical entertainment, speeches, education and awareness.

But 25 years ago, when it first began, the concept was new, exciting and a triumph. That was not the same river we see today. The Verde River had become something of a war zone for some and a dumping ground. By early 1989, there was traction for preservation of the Verde River.

John Parsons, "Mr. River," and others were already bringing the "powers that be" into their canoes to show what kind of fabulous resource we had at our footsteps, a resource often overlooked, abused, and even neglected from its very familiarity. He helped to found the Northern Arizona Paddlers Club in 1981. Parsons also had a burning desire to remove from the river the numerous sand-and-gravel operators that he felt plugged its passage.

Recently, The Verde Valley Land Preservation Institute took the same concept another step. VVLPI took artists on a three-day float down the river, inviting them to create works of art as a response to their trips; works that will benefit the organization's ongoing efforts. "A River Runs thru Us" art show was launched at the Mannheim Gallery in Cottonwood and has moved on to White Hills in Camp Verde. Part of the show will be on display this year at Verde River Day before the tour continues.

"The river bottom today is light years cleaner than it was then back then."

Millard Meccia was the leader of the Action Beautification Committee in 1989. He had already been leading cleanup campaigns on the riparian areas for several years. Like those tales of historic Italy, for example, and other historic urban areas where garbage had been thrown from windows into the streets, the Verde River had been a place that was collecting 20th- century garbage. The river had become a convenient bedroom for transients who would also abandoned their bed linens.

They are all "slobs," Meccia branded those that would that litter the wilderness. "Metch" commanded scores of volunteers to annually fill roll-off dumpsters to brimming with old tires, couches and bicycles that had been discarded at the riverside.

Former Gov. Bruce Babbitt created the Verde River Greenway as he was leaving office in 1984, from funding intended to resolve the upstream impacts of the Central Arizona Project. Babbitt, from Northern Arizona, had a home near Oak Creek in Sedona. But he recalled playing along the Verde River as a child, speaking at length of the rare Cottonwood canopy that is a prized feature of the river.

Parsons continued his momentum, taking his message into two election campaigns, which unsuccessfully sought both House and Congressional seats on a "Land, Water and Legacy" platform. But he was even more successful when appointed to the board of the Arizona Outdoor Recreation Coordinating Commission, which allocated dollars from boat licenses. He had recognized the need to get more eyes onto the river to see it first-hand. Parsons succeeded in convincing AORCC to allocate money to rivers, rather than lakes exclusively, and used money to establish a series of river access points on forest land between Cottonwood and Camp Verde.

Campaigning in a former green forest service truck with a canoe strapped to the roof established Parson's name recognition.

With the growing recognition, Parsons was able to eventually hook the regional director of the EPA to take a canoe trip down the Verde. When he climbed out of Parson's canoe, he promised he would consider the sand-and-gravel business on the Verde River.

Parsons had been looking for a "defining event" to bring his mission to reclaim the Verde River for the people. He took his message to a meeting of the Verde National Resource Conservation District in 1988. Parsons spoke to the board of his private war against sand and gravel interests in the river and how he needed allies in the fight. When he was finished, Parsons remembers board member Charles Van Gorder telling him, "John, you need a Day for the River. Give the people a Day for the River." The VNRCD board gave its unanimous support for a Day for the River.

Parson parlayed the NRCD endorsement for the Day for the River to the Verde Valley Chamber of Commerce as a full-fledged event.

"We saw the opportunity to bring people in from the outside," Pete Sesow remembers. "It was good advertising and just to show some of the things we have in Cottonwood." He says volunteers really made it happen. And it gave recognition to the Chamber.

"I went on a lot of those cleanups, all the way up to Tuzigoot," he says. Sesow was the Verde Valley Chamber of Commerce director in the late 1980s. "We cleaned up a lot of stuff. To get more people aware of the resource and that water was important to us.

"Fish and Game stocked the lagoon and got people involved with the fishing day. It was wonderful to be a part of that and have the workers to make it a success."

Randy Miller had been doing environmental education in the schools and had a connection with the Verde Natural resource Conservation District. Jon Clow, the Dead Horse Ranch State Park manager, who originally opened the park on the former "Cap" Ireys Ranch in 1976, remembered that Miller brought the idea of an environment fair to him and the idea took off. "We had thought it would just be a small environmental fair and the idea "just ballooned" that first year.

Max Castillo, who worked in the park with Clow, remembers that a lot of people had been using those sand-and-gravel mines in the river as a fishing point, so there was an understanding of the issue. But there was little environmental awareness yet, generally. "Few people had heard of recycling. A flood would come and wash everything downstream."

"Verde River Day was an effort to bring "value' of the river to the Verde Valley; to bring attention to the value of that river and what can be done to it," says Dick Larson, who was publisher of the Verde Independent in 1989.

Led by John Parsons, "it was a small group that got together. They wanted my involvement. They knew that if I was involved, then the newspaper would be involved. We became the major sponsor along with the State Parks. People understood that we could make it an event just by our involvement. The "power of the press' was evidenced in really good ways, I think," Larson says.

He says the river had been given a short shrift over time.

"It just didn't have a strong focus that it should have. There were just a handful of people, like John Parsons and Randy Miller, that really understood what that river "meant' and it was those people that were on that committee. Those people had great motivations and I really think it was the paper that helped really make that happen. We pushed it hard as an event."

Parson continued his stream of correspondence to the EPA, showing the community support growing around the river.

The same day as that first running of Verde River Day at Dead Horse Ranch State Park, the order was handed down by the EPA charging four sand and gravel operators with illegal discharges into the Verde River and they were forced to take their mines elsewhere.

The Verde River Corridor Project, with a steering committee from across the entire Verde Valley was also launched in 1989 and completed two years later.

Of course the announcement of the Big Chino pipeline set off a subsequent concern that the Verde River may decline from the source of its flow.

Chamber Director Lana Tolleson believes Verde River Day continues to be an historic opportunity today to showcase the Verde River and offer the "educational piece of the Verde.'

"The beauty of this event is that it has an educational piece to it and it has for 25 years. It is not a commercial event."

Lana says tourism of the river is "starting to build, especially since we've seen a lot of publicity like the Water to Wine float trip. People that didn't know that the river runs through here are starting to ask, "how can we get on the river?' We send a lot of people to Sedona Adventure Tours, because they the provider right now who have the float trips, tubes and inflatable kayaks. There are people now that show up with kayaks on their cars and ask "how can we get on the river?'

Clarkdale has developed an initiative, "The Verde River @ Clarkdale." The program has installed river access points at the old Tapco power plant and near the Tuzigoot Bridge. Float trips are anticipated. Cottonwood is also investigating floats through its section of the river.

"One of the issues is that there is some much private property along the river and there has not been a commercial push," Tolleson continues. "It is really a balance between protecting the river and having tourists come and enjoy the river."

"We have to absolutely have to protect it and keep it clean, but also explore it. It is so much fun and such a economic opportunity for us, but we have to make sure, we keep it clean."

"We want to promote appreciation of it, but we want to protect it and the private property. It is definitely an asset for our community. For the 25th anniversary this year, we will join hands around the lagoon, to show our support and take care of our natural resources.