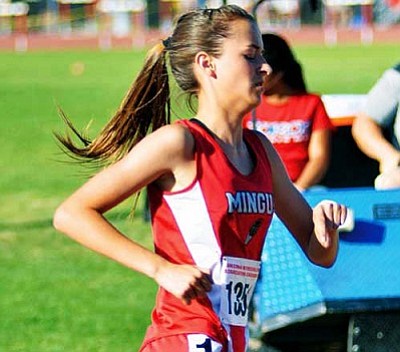 The Aftershock Distance Club continued to show why it is one of the premier running clubs in Arizona, after finishing second in the open race with 49 points, at the Dave Murray Cross-Country Invitational.

The Dave Murray Invitational is primarily a college race, with teams from ASU, Arizona and NAU represented, but instead of dividing up the race into multiple heats, the officials had the college runners run with the open race.

"It was harder. It was more hilly and, of course, the competition level was way up," said Allyson Arellano.

This led to an interesting, and fruitful, race. Aftershock was able to show off its runners, as all of the members finished ahead of college runners.

"It was just so cool being able to see all the college athletes, meet all them and watch them race," said Megan Goettl.

Finishing first for Aftershock was Arellano. Arellano finished the race in 18:36.46, which landed her in NO. 5 in the open division and NO. 27 overall. About 30 seconds after Arellano crossed the finish line; teammate Goettl finished No 6 with a time of 19:02.02.

"It's kind of a whole different story," Goettl said. "They just run different."

With all of their runners finishing in the top-50 of the open race, and top-100 overall, Aftershock's team score was enough to earn it a No. 2 finish in the open race and a No. 5 overall team finish, beating Grand Canyon University and community colleges Mesa, Paradise Valley and Pima.

We were pretty happy to knock off one Division-1 school in Grand Canyon University," said head coach Micah Swenson. "There's still plenty of work to do for us to get where we want to be. We are looking to peak in late November, early December, so this is still early in the whole spectrum of things for this season."

The Aftershock girls impressed so much that the race officials for Arizona invited the club back for 2014's race, which was "pretty cool" since they are the No. 5 team in the country, said Swenson.

"It was fun. We got to meet some new people and see other people that we've seen before," Arellano said.

While the club was able to go out and impress with their results, it was the type of race that helped the team grow. The course was mainly hills, with few flat areas. As the race progressed, the field of runners became more physical and separated. The girls, who are in middle school and high school, were able to handle the physicality of running against college-level runners, and Swenson said it was good for them to experience that, as the Junior Olympics would be similar.

It was fairly physical within some of the early packs," Swenson said. "As the racecourse became more challenging, the field separated more. I was really pleased to see our girls make moves over the final mile of the course to pass other runners or reconnect to them to make moves over the final straightaway. Several of our girls were able to use the final stages of the course to pass competitors."

Swenson and his team were happy with their results at the race and now look forward to competing in the Desert twilight race on Oct. 4.