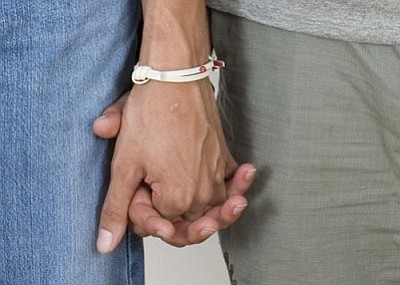 Clarkdale could become the fifth city in the state to recognize contractual relationships similar to marriage, regardless of sexual orientation or gender.

Councilman Curtiss Bohall urged the council to pursue the issue, which has been added to the Oct. 8 agenda.

Sedona passed its own ordinance Tuesday with a 5-2 vote. Clarkdale Mayor Doug Von Gausig said his council may decide to base its ordinance draft on Sedona or Jerome.

"Councilman Bohall felt very strongly that equality was very important in our town," Von Gausig said. "This was a good gesture that promotes that kind of equality."

Clarkdale already extends benefits to the partners in same-sex couples.

"It's certainly going to be more of a symbolic gesture, but it's a gesture of support for the LGBT community," he said. "Most of what the ordinance would grant is already in the town of Clarkdale."

In Sedona, there were two votes against the ordinance from council members Dan McIlroy and Mike Ward.

McIlroy, a born-again Christian, didn't bring his religious views into the council meetings that led to the new law's passage because they would have "fallen on deaf ears."

"I don't think civil unions are appropriate in God's sight," he said. "If the people of Clarkdale or Cottonwood or Camp Verde decide they want this, we have to honor the will of the people."

Civil unions need to be decided by a council rather than the people. Sedona is divided on many issues, and he said a council of seven shouldn't decide contentious laws.

Small pockets of Arizona are embracing civil unions, McIlroy said, but the council exists to find out what people want, and represent them accordingly.

"I don't think the people in Arizona as a state are ready for this," he said. "Let the people speak in the larger context and not just let the council decide on an issue that had moral, religious and political implications."

Ward said while supporters of an issue are more likely to show up for a meeting, some members of McIlroy's church did speak against civil unions despite being outnumbered.

Ward said he took issue with the change because the new wording was too close to marriage.

"There is a community in Sedona that has a very strong voice to make marriage between a man and a woman," he said. "I would have voted yes if a couple members of the council had not made it a marriage issue."

Sedona Mayor Rob Adams said the majority of the council was confident the ordinance was a civil union and not crossing into the territory of marriage.

The law will take effect around Oct. 23. Members of national non-profit organization PFLAG and local group Sedona Pride attended the vote to show their support.

"The room was filled with people who are supporters of this and who will probably take advantage of the opportunity to file with the city," he said.

The wording of the ordinance embodied how he and five other councilors felt.

"It reflects some of the core principles of Sedona in terms of being a community that embraces equality," Adams said.

Same-sex couples have an equal right to show their commitment to one another, he said.

"Any change is initiated at a grassroots or local level," Adams said. "So hopefully that's what we're seeing, is change."

Von Gausig said Clarkdale still has a lot of public opinion to solicit before it proceeds, and the Oct. 8 work session will be the start of the process.

"It was a brave move on the parts of Tucson, Bisbee, Jerome and Sedona," he said. "We just took a little while to get on the bandwagon, but here we are."

"Most of what the ordinance would grant is already in the town of Clarkdale."