Report: No indications of negligence or recklessness in Hotshots' deaths 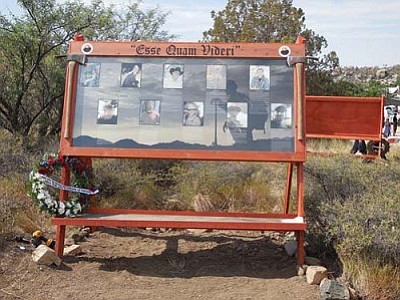 The Arizona State Forestry Department's investigation into the deaths of 19 Granite Mountain Hotshots on June 30, during the Yarnell Hill wildfire, found "no indication of negligence, reckless actions or violations of protocol."

The report cites a combination of adverse conditions that led to the deaths of the Prescott-based firefighters: severe and changeable wind and weather conditions, spotty communication and a rapid increase of the fire's complexity that forced multiple changes in command during the day.

The investigation team believes the Hotshots were trying to reposition themselves so they could reengage the spreading fire, and they did not perceive the excessive risk in repositioning to Boulder Creek Ranch, 600 yards away from the spot where the fire overtook them.

As they were moving toward the ranch, operations believed they were still on the ridge.

And while aircraft were not always available because of adverse weather conditions and refueling needs, a VLT (Very Large Tanker) was on station over the fire waiting to drop retardant as soon as the crew's location was determined.

For most of the day, fire spread to the northeast, threatening structures n Model Creek and Peeples Valley. At around 3:30 p.m., the wind shifted and pushed the fire southeast, toward Yarnell.

Most of the available fire resources shifted to resident evacuation and only the Granite Mountain Hotshots remained on the burned-out ridge where they were observing the fire. Those who communicated with the Hotshots assumed they would stay there.

Fr0m 4:04 to 4:47 p.m., there is an information gap. "There is much that cannot be known about the crew's decisions and actions prior to their entrapment and fire shelter deployment at around 4:42," the report reads.

• The Granite Mountain IHC was a fully qualified, staffed and trained hotshot crew. They were current with the required training and met work/rest guidelines. The crew followed all standards and guidelines as stated in the Standards for Interagency Hotshot Crew Operations and the Arizona State Forestry Division's Operational Guideline 804.

• The Yarnell Hill area had not experienced wildfire in over 45 years, It was primed to burn because of extreme drought, decayed chaparral, and above-average cured grass loadings.

• Although Yavapai County had a Community Wildfire Protection Plan, many structures were not defendable by firefighters responding to the Yarnell Hill Fire. The fire destroyed over one hundred structures.

• Radio communication was challenging throughout the incident. Some radios were not programmed with appropriate tone guards. Crews identified the problem, engaged in troubleshooting, and developed workarounds so they could communicate using their radios. Radio traffic was heavy during critical times on the fire.

• The fire's complexity increased in a very short time, challenging all firefighting resources to keep pace with the rapidly expanding incident. As complexity dramatically increased starting Saturday evening, fire management went through multiple transformations from a Type 4 through a Type 1 incident in less than 20 hours.

• The Granite Mountain IHC had been watching the active fire burn away fro their position all day but their observations did not lead them to anticipate the approaching outflow boundary or the accompanying significant fire behavior changes, These changes included a doubling of fire intensity and flame lengths, a second 90-degree directional change, and a dramatically accelerated rate of spread.

• The Granite Mountain IHC left the lunch spot and traveled southeast on the two-track road near the ridge top. Then, they descended from the two-track road and took the most direct route toward Boulder Springs Ranch, The team believes the crew was attempting to reposition so they could reengage.

• The Granite Mountain IHC did not perceive the excessive risk in repositioning to Boulder Springs Ranch.

• The Team found no indication that the Granite Mountain IHC doubted the black (burned-out area) was a valid safety zone, or that they moved toward the Boulder Springs Ranch because they feared for their safety of they stayed in the black.

• Although much communication occurred among crews throughout the day, few people understood Granite Mountain's intentions, movements, and location, once they left the black. The Team believes this is due to brief, informal, and vague radio transmissions and talkarounds that can occur during wildland fire communications. Based on radio conversations, Operations and other resources had concluded that the Granite Mountain IHC was located in the black, near the ridge top where they had started that morning. This resulted in confusion about the crew's actual location at the time of search and rescue.

• An Air Attack and/or an Aerial Supervision Module provided aerial supervision coverage throughout the day including at the time of the accident.

• The Aerial Supervision Module working the fire was very busy fulfilling leadplane duties, which limited their ability to perform full Air Attack responsibilities over the fire at the same time.

• During some limited times, aircraft were not available due to adverse weather and refueling needs.

• At the time of the shelter deployment, a Very Large Airtanker was on station over the fire waiting to drop retardant as soon as the crew's location was determined.

• The judgments and decisions of the incident management organizations managing this fire were reasonable. Firefighters performed within their scope of duty, as defined by their respective organizations. The Team found no indication of negligence, reckless actions, or violations of policy or protocol.